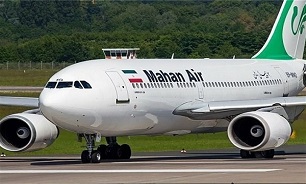 Videos broadcast by Iranian and Lebanese media, which said the footage was taken by passengers, showed a fighter jet flying alongside the passenger plane, operated by Mahan Air, a privately owned Iranian airline.

Passengers then screamed as sudden turbulence seized the plane. In the aftermath, one video showed a passenger with his face and head bloodied, as well as a man lying down, apparently unconscious, while someone tended to him. Oxygen masks dangled overhead.

Capt. Bill Urban, a spokesman for the US Central Command, said in a statement later Thursday that an Air Force F-15 on “a routine air mission” near a small American military base in southern Syria had conducted “a standard visual inspection of a Mahan Air passenger airliner,” the New York Times reported.

Captain Urban claimed the encounter on Thursday was conducted at “a safe distance of approximately 1,000 meters” and was done to “ensure the safety of coalition personnel.”

“Once the F-15 pilot identified the aircraft as a Mahan Air passenger plane,” Captain Urban added, “the F-15 safely opened distance from the aircraft.” He said the encounter was done “in accordance with international standards.”

A US military official said a second US Air Force F-15 was at least two miles away from the Mahan Air jetliner, but only one of the US aircraft closed to about 1,000 meters.

Iranian state television, citing an interview with the Mahan Air pilot, had reported earlier that the fighter jets were American.

Lebanese media said an elderly passenger had been taken to hospital. Lebanese civil aviation authorities said the plane had been carrying 150 passengers, some of whom suffered minor injuries.

The plane later landed in Beirut, safely evacuating its passengers. After refueling, it immediately took off and returned to Tehran’s Imam Khomeini without any harassment, media reports say.