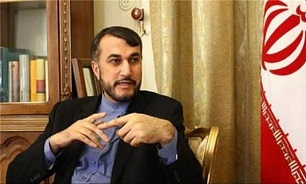 Amir-Abdollahian made the remarks on Saturday evening and added that Iranian and Iraqi people and officials have mutual understanding of their social, religious and cultural commonalities.

Elaborating on the level of Iran-Iraq relations, he said that there has been a notable growth in trade exchange of the two neighborly and friendly countries.

The agreement was made during the Tuesday evening meeting between the two high-ranking officials in Tehran.

In the meeting President Rouhani said that the foreign powers cannot disrupt the brotherly relations of the two old neighbors.

"The concern and interest of the two nations and governments of Iran and Iraq towards their fates is a great asset on the path of all-out development of their relations," the Iranian president added.

He said that Iran and Iraq share numerous commonalities in cultural, religious, historical and political fields and the seminaries of Qom and Najaf are regarded as two great assets of Iran and Iraq.

Rouhani said that Iran and Iraq can pass through the difficult situation created by the deadly coronavirus, noting that the two countries should accelerate implementation of all the existing agreements through widespread cooperation.

"The Islamic Republic of Iran firmly supports the determining role played by Iraq as a powerful Muslim and Arab country in the region in line with restoring peace and stability," the Iranian president added.

In relevant remarks on Tuesday, al-Kadhimi noted the strong presence of Iran-made goods in his country's market, and expressed the hope that the Khorramshahr-Basra railway would soon be linked for the further development of economic relations between the two neighbors.

“We held talks to implement agreements between the two countries, including connecting the two railways from Khorramshahr to Basra and I hope so much that these agreements will be implemented soon,” al-Kadhimi said at a joint press conference with President Rouhani in Tehran.

“I hope to witness flourishing economic ties between the two countries,” he added.

“Iraq does not allow any threat to be posed to Iran from its territories, specially given the fact that relations between the two countries date back to hundreds of years ago and we should support these age-old ties,” al-Kadhimi said.

He emphasized that Baghdad wants excellent relations with Tehran, appreciating Iran for its assistance, as the first country to have rushed to Iraq's fight against the terrorist groups.

The Iraqi premier also thanked Iran's help to his nation in campaign against the Coronavirus in recent months.

“Iraq has also stood beside Iran to help it pass the economic challenges,” al-Kadhimi said, adding that the Iraqi markets are full of goods imported from Iran.

“Our relations with Iran and different countries are based on good will and we are endeavoring to find solutions to take the region out of challenges and tensions that we are suffering through cooperation with the Islamic Republic of Iran,” he added.

Rouhani, for his part, said that Iran will help the Iraqi government and nation in fighting against the coronavirus as much as its possibilities and capacities allow and will provide the country with medicine and hygiene products.

Also, the two countries are determined to implement the agreement which was signed by Tehran and Baghdad nearly two years ago, President Rouhani said.