Turkey Says Oil Deal Between SDF, US Firm Amounts to ‘Financing of Terrorism’

TEHRAN (defapress)- Turkey denounced a deal recently signed between the Syrian Democratic Forces (SDF) and an American company aimed at stealing oil in Northeastern Syria, describing it as equivalent to "financing of terrorism".
News ID: 81722 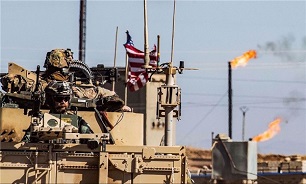 “We regret the US support for this step that ignores international law and that targets Syria’s territorial integrity and sovereignty,” Turkey’s Foreign Ministry said in a statement on Monday, according to presstv.

It considered the deal to be “the financing of terrorism” and “unacceptable”.

The Foreign Ministry accused the Syrian Kurdish militants of advancing the SDF’s “separatist agenda by confiscating, with this step, Syrian people’s natural resources”.

The Syrian government on Sunday also condemned the agreement, which Turkey has also described as “unacceptable”.

Damascus says the deal is “an affront to national sovereignty” that amounts to “theft”.

The Syrian Foreign Ministry has slammed Washington for hindering the Syrian government’s efforts for rebuilding what has been destroyed by the foreign-led terrorism, which is “mostly backed by the US administration itself”.

Al-Monitor, citing unnamed sources, also named the company in a report on Thursday as Delta Crescent Energy LLC, a corporation organized under the laws of the state of Delaware, without giving further details.

On July 30 and during his testimony to the Senate Foreign Relations Committee, US Secretary of State Mike Pompeo confirmed for the first time that an American oil company would begin work in the SDF-controlled northeastern Syria.

A US-led military coalition has been bombarding what it claimed was positions of the Daesh (ISIL or ISIS) terrorists inside Syria since September 2014 without any authorization from the Damascus government or a UN mandate.

The strikes have on many occasions resulted in civilian casualties and failed to fulfill their declared aim of countering terrorism.

The White House has long been providing the SDF with arms and militant training, calling them a key partner in the purported fight against Daesh. Many observers, however, see the support in the context of Washington’s plans to carve out a foothold in Syria.

That support has also angered Washington’s NATO ally, Turkey, which views militants from the Kurdish People’s Protection Units (YPG) – the backbone of the SDF – as a terrorist organization tied to the homegrown Kurdistan Workers’ Party (PKK).