TEHRAN (defapress) – A former member of the Israeli parliament expressed glee over a massive blast that the Lebanese capital, describing the tragic incident, which has left many dead or injured and destroyed much of a city, as a “gift” from God for a Jewish festival.
News ID: 81737 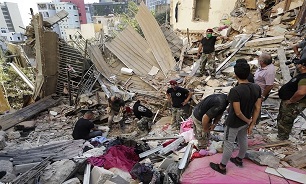 In a post on his Facebook page on Wednesday, far-right Zehut party leader Moshe Feiglin said the devastating explosion was just in time for the so-called “Holiday of Love.”

“Today is Tu B’Av, a day of joy, and a true and huge thank you to G-d and all the geniuses and heroes really (!) who organized for us this wonderful celebration in honor of the day of love,” he wrote. “Marking Tu B'Av holiday, we’ve got a fantastic fireworks show from Beirut’s port.”

Lebanon has been in shock and grief since Tuesday, when the blast flattened the whole port in Beirut and large parts of the city center, turning building into masses of debris and twisted metal.

At least 135 people were killed, about 5,000 wounded, many went missing and up to 300,000 people were rendered homeless. The number of casualties is also expected to rise as search and rescue operations are still ongoing.

The blast appeared to have been caused by a fire, which led to the detonation of a cargo of ammonium nitrate that had been stored at the port for years.

It is not known what sparked the fire. An investigation is underway to determine all dimensions of the incident, with Beirut vowing to bring those responsible to justice.

Feiglin, however, suggested, without evidence, that the blast did not happen accidentally.

“You don’t really believe that this was some messy fuel warehouse, yeah? Do you understand that this hell was supposed to fall on us as a rain of missiles?!” he wrote.

The Israeli politician further compared the blast to one caused by a nuclear bomb, saying that the smoke that billowed into the sky looked similar to a mushroom cloud.

“I have some experience with explosives. The largest explosion I took part in was 2.5 tons of TNT. What we saw yesterday at the Port of Beirut was much bigger. The destructive effect (without the radiation) was like a nuclear bomb,” he wrote.

Feiglin’s remarks about the incident prompted angry reactions on social media, with users blasting him, along with other Israeli figures, for rejoicing over the plight of people the Lebanese people.

Later on Wednesday, the ex-Israeli lawmaker responded to the wave of anger over his comments.

Striking a defiant tone, Feiglin expressed hope in an interview with a local radio station later in the day that the Israeli regime was behind the Beirut blast and claimed that he was allowed to rejoice over the incident.

“If it was us, and I hope it was us, then we should be proud of it, and with that we will create a balance of terror. By avoiding saying it’s us, we are putting ourselves on the dark side of morality,” he said. “We are all allowed to rejoice that it exploded in the port of Beirut and not in Tel Aviv.”