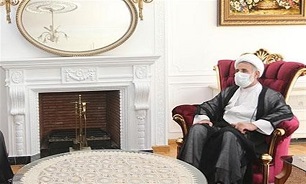 He also referred to the recent deadly blast in Beirut and said Iran will keep supporting Lebanon to put this terrible incident behind it.

Saying that the threats created need to become opportunities, he underlined that boosting national unity after the disaster is necessary.

Zonnouri further said that global humanitarian assistance is needed in the current situation in Beirut, but warned that certain countries must not take advantage of the situation in the form of help in order to gain political dominance in Lebanon.

The Lebanese envoy, for his part, lauded Iran for always standing with the people and government of Lebanon as a friend and brother.

He also highlighted Iran’s decisive role in the region.

According to latest Lebanese health ministry figures, the monster explosion at Beirut port on August 4 killed 171 and injured 6,500.

Some 300,000 people were also displaced as residential buildings were fully or partially damaged.

Officials linked the blast to hundreds of tons of confiscated ammonium nitrate that were being stored in a warehouse at the port for six years.

The explosion has also destroyed Lebanon’s silos that contain the national grain reserve. Lebanon imports up to 80 percent of its food needs and is particularly reliant on imported soft wheat to make Arabic flatbread. About 85 per cent of the country's cereals were reportedly stored in the facility.