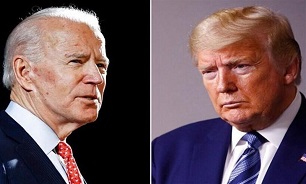 The movement in the poll among voters is concentrated among men, who were split about evenly in June but who now back Trump over Biden 56 to 40 percent, and voters between the ages of 35 and 64, who tilt toward Trump now but were leaning toward Biden in June.

Among independents, Biden also held a 52 percent lead over Trump’s 41 percent in June, but now independents are nearly evenly divided with 46 percent backing Biden and 45 percent for Trump, according to CNN.

The results of the national survey come just ahead of the Democratic National Convention, which begins on Monday. A range of Democrats are scheduled to speak as part of the virtual programming to boost Biden as the former vice president is set to accept the party's nomination.

Other recent polls, including an NBC News-Wall Street Journal poll released earlier Sunday, have found Biden with a wider lead over Trump. Recent polls of key battleground states have also indicated Biden has a lead over the president.

The study was conducted for CNN by SSRS, an independent research company between Aug. 12-15. It is based on a sample of 1,108 respondents. There is a margin of error of 3.7 percentage points.