TEHRAN (defapress) – Parliament Speaker Mohammad Bagher Ghalibaf pointed to the effectiveness of standing against enemies, noting that the resistance has always brought great victories for the country.
News ID: 81823 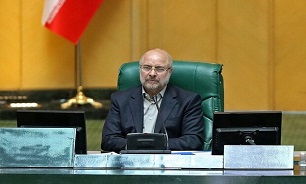 While addressing the Parliament’s open session on Wednesday, Ghalibaf said, "History shows us that standing against Terrorists as well as governing the affairs of the country with ration and prudence will always lead to achieving great victories."

Asserting that the 1953 coup is a clear example that shows the United States is the sworn enemy of the Iranian nation, he stressed, “The only way to protect our national interests against this sworn enemy is to become stronger."

“At present, our country is strong enough to rescue the region (Middle East) from the costly and vicious plans of the United States, the Zionist regime, and the reactionaries in the region”, he added.

Referring to 67 years ago, some American agents simply staged a coup and looted Iranian nation's property and resources, Ghalibaf said, “However, now, Iran as the representative of the right against the arrogant enemy in the world, can stand against the most complicated plans of Terrorist America and its allies in the region and the world."