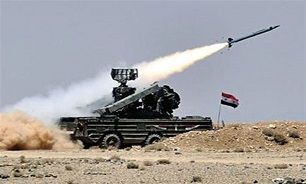 The Israeli airstrike was launched at 22:40 (local time) on Monday from the occupied Golan Heights against some military sites in southern Damascus, a military source told Syria’s official news agency SANA.

The Syrian army air defenses repelled the aggression and shot down most of the missiles before they reach their targets, the source added.

The source said that the Israeli aggression led to the martyrdom of two soldiers and injuring seven others in addition to material damages.

Syria has been gripped by foreign-backed militancy since March 2011. The Syrian government says the Israeli regime and its Western and regional allies are aiding Takfiri terrorist groups that are wreaking havoc in the country.

Israel frequently targets military positions inside Syria, especially those of Hezbollah which has played a key role in helping the Syrian army in its fight against terrorists.

The Tel Aviv regime mostly keeps quiet about the attacks on Syrian territories which many view as knee-jerk reaction to Syrian government’s increasing success in confronting terrorism in country.

Israel has been a main supporter of terrorist groups that have opposed the government of President Bashar al-Assad since militancy erupted in Syria nine years ago.