Desecration of Divine Messengers, Blatant Abuse of Freedom of Expression 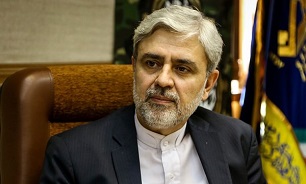 Hosseini censured the provocative move of the French magazine, Charlie Hebdo, in republishing the sacrilegious caricatures and called it an abuse of freedom of expression.

"Tolerance for insulting and provocative actions of Charlie Hebdo in France has led to tragedies such as the killing of 51 innocent Muslims in New Zealand mosques,” Hosseini wrote on his Twitter page on Friday.

Charlie Hebdo is a French magazine with a very black record of publishing anti-Islamic content. It had published caricatures of Holy Prophet Muhammad (PBUH) in 2012 and 2015 that sparked million-strong rallies of Muslims around the globe.

In early January 2015, the ISIL terrorist group attacked the weekly after it released a cartoon of ISIL leader Abu Bakr Al-Baqdadi. At least 12 people were killed when masked gunmen stormed the Paris offices of Charlie Hebdo and opened fire.

Iranian officials condemned the attack, but warned that the incident should not be used as a pretext for accusing Islam or pressuring the Muslim community in the West, reminding that ISIL is not an Islamic group.

The same day, the former Foreign Ministry Spokeswoman Marziyeh Afkham condemned the attack, and said any act of terrorism against innocent people is opposed to Islamic teachings.

In relevant remarks on Friday, Iranian Foreign Ministry Spokesman Saeed Khatibzadeh strongly condemned the insult to Prophet Mohammad (PBUH) by the ill-reputed French Magazine Charlie Hebdo, stressing that the move has injured the feelings of all Muslims in the world.

Khatibzadeh said any irreverence to the Prophet of Islam or other prophets is totally unacceptable.

He noted that the provocative move, under the disguise of freedom of speech, has hurt the feelings of all monotheists in the world and also disrespected Islamic values and the beliefs of more than one billion Muslims.