TEHRAN (defapress) – Swiss Foreign Minister Ignazio Cassis said that the scientific and tourism relations between Iran and Switzerland should be expanded in the post-coronavirus era.
News ID: 81947 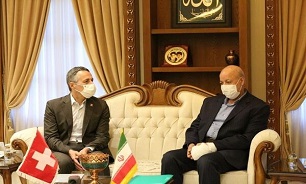 He made the remarks in a meeting with Isfahan Governor General Abbas Rezaei on Saturday, saying, "Tomorrow in Tehran, we will celebrate the centenary of joint diplomatic activities between Iran and Switzerland in an official meeting."

"Relations between the two countries are 100 years old and have continued since the late 19th century with the signing of the peace and trade agreement between Iran and Switzerland," Cassis added.

He noted, "Peace and trade are two important factors in the development of countries and Switzerland has always sought peace and tranquility."

Referring to Switzerland's mediating role between Iran and the US, he said, "Switzerland is trying to provide the minimums for dialogue between the two countries."

Swiss Foreign Minister said, "Prior to visiting Tehran to hold an official meeting with the Iranian president and foreign minister, I wanted to visit Mr. Zarif's hometown, and today I watched a glimpse of the beauties of this city."

"The excellent relations between Iran and Switzerland should be expanded, especially in the fields of science and tourism in the post-coronavirus era," he added.

The Swiss Foreign Minister arrived in Isfahan on Saturday morning to pay a three-day visit and meet with officials of the Islamic Republic of Iran.

Cassis is scheduled to return to Tehran to begin his official program.

One of the most significant events during the Swiss official’s Iran visit will be a meeting marking the 100th anniversary of the start of relations between the two countries.

On Sunday and Monday respectively, the Swiss Foreign Minister will meet with President Hassan Rouhani and Foreign Minister Mohammad Javad Zarif, as well as other Iranian high-ranking officials.