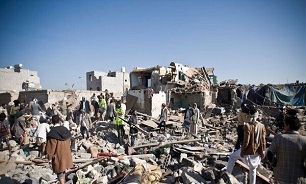 The Saudi-led coalition has violated the ceasefire in Yemen once more and launched a series of attacks on the country, Al-Masirah reported.

According to the report, in the past 24 hours, various areas of Yemen, including parts of Sa'dah province, have been targeted by Saudi fighter jets.

As Arab media reported, residential areas in Sa'dah province were bombed by Saudi fighters and a number of Yemeni civilians were wounded.

Saudi-led coalition emphasizes its alleged and false ceasefire in the country as it continues to attack Yemeni civilians.

So far, the international community has made no attempt to stop the war against Yemen; an issue that has drawn criticism from the Yemeni National Salvation Government.

In recent months, the Saudi-led coalition has violated the ceasefire many times.

Thousands of Yemenis have been killed so far as a result of the Saudi invasion, and according to the United Nations, the famine in the country has become the biggest humanitarian catastrophe in the world.