Iran Resolved to Interact with World to Defy US

TEHRAN (defapress) – The spokesperson for the Iranian administration reaffirmed Tehran’s determination to work with all countries and international organizations to protect the rule of law against the US government’s threats and law-breaking.
News ID: 81973 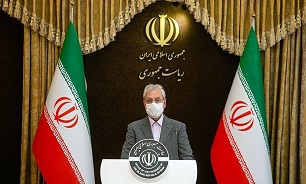 Speaking at a press conference on Tuesday, Ali Rabiee said the recent visits to Iran by the IAEA director general and a Swiss delegation mark a new stage in the promotion of Iran’s constructive international interaction.

Regardless of Washington’s threats and meaningless shows, Iran is resolved to continue interaction with all countries and international organizations with respect and goodwill in order to defend the rule of law and common norms alongside other nations in defiance of the unprecedented American lawlessness, he added.

The spokesman said an increase in Iran’s diplomatic activities indicates the US’ failure in carrying out the destructive plots that are aimed at ruining the JCPOA, multilateralism, and international regulations.

Apart from the constant efforts to build trust as the basis of constructive and effective foreign relations, Iran is pushing to enhance trade ties and remove the obstacles to economic cooperation with the other countries in a new round of active diplomacy, he added.