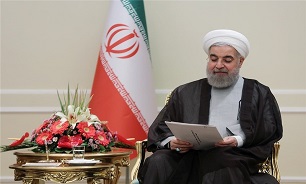 In a message on Thursday, Rouhani warmly congratulated Suga on taking office as Japan’s prime minister.

The president also paid tribute to former Japanese prime minister, Shinzo Abe, for his “major and influential role” in promoting the relations between Tehran and Tokyo.

“The constant consultations between the officials of the Islamic Republic of Iran and Japan, especially in 2019 on the occasion of the 90th anniversary of establishment of political ties which was marked by reciprocal visits by the heads of the two states to the capitals, have opened a new chapter in the expansion of relations in all fields of mutual interest,” Rouhani added.

He further expressed hope that the friendly relations between Iran and Japan and their mutual cooperation in various fields, particularly the economic and trade ties, would further grow during Prime Minister Suga’s tenure.

He also wished the Japanese leader and people health, success and prosperity.

Yoshihide Suga was elected as Japan's new prime minister by the country's lower house of parliament on Wednesday, replacing Shinzo Abe who resigned because of poor health and promising to continue his signature economic policies.

The former Chief Cabinet Secretary and Abe loyalist appointed a new cabinet shortly after he became prime minister, keeping about half of the familiar faces from his predecessor's lineup.