TEHRAN (defapress)- Iranian Ambassador to the UN Majid Takht Ravanchi said the US claim about restoration of the UNSC bans on his country based on the self-styled “snapback” mechanism is null and void, and urged the UN and Security Council to prevent such move.
News ID: 82070 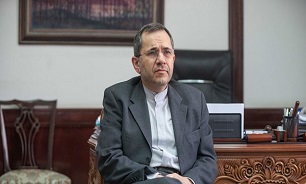 Takht-Ravanchi made the remarks in a letter to the UN Security Council and to the UN Secretary-General early Sunday.

"Given that the stated objective of the United States is to completely ruin the Joint Comprehensive Plan of Action and to that end, its strategy is to create legal complication through presenting unilateral arbitrary interpretations and pseudo-legal arguments,” he wrote, and added, “The Islamic Republic of Iran trusts that the members of the Security Council will, once again, reject the United States' continued attempt to abuse the Security Council's process, thus undermining the authority and credibility of the Council and the United Nations."

Iran’s envoy also wrote on his Twitter page that the UNSC member states still believe that the US is not a JCPOA participant, so Washington’s "snapback" claim is null & void.

Takht Ravanchi added that the US has not given up violating the JCPOA and UN Security Council Resolution 2231, warning that this will cause more isolation for Washington in the world.

US' illegal & false “deadline" has come and gone.

UNSC member states continue to maintain US is NOT a JCPOA participant, so its claim of “snapback" is null & void.

US is STILL in violation of JCPOA and Res 2231—swimming against int'l currents will only bring it more isolation.

In relevant remarks, Chairman of the Iranian Parliament’s National Security and Foreign Policy Commission Mojtaba Zonnouri warned that if the removed UN sanctions against his country are returned, Iran will reciprocate by stopping all its cooperation with the International Atomic Energy Agency (IAEA) envisaged in the nuclear deal.

“If the US activates the trigger mechanism and be able to implement what it says and the EU and other countries' behavior towards Iran is influenced by the mechanism, naturally we will stop the Agency’s monitoring activities enshrined under the nuclear deal and will abandon all limitations posed to our peaceful nuclear activities under the nuclear deal,” Zonnouri told FNA on Saturday.

“If the US bullying leads to the implementation of the trigger mechanism, we will return to the conditions of the pre-nuclear deal era,” he warned.

Zonnouri said that a triple-urgency plan by the parliament will require the government to remove all limitations on the nuclear fuel cycle and enrich uranium to the level the country needs (which now stands at 20% level).

In relevant remarks on Thursday, Iranian Foreign Minister Mohammad Javad Zarif said the US is not a participant to the Joint Comprehensive Plan of Action (JCPOA), and urged American Secretary of State Mike Pompeo to read UNSC Resolution 2231.

Zarif wrote on his Twitter page that Pompeo is still wrong, urging him to read UN Security Council 2231.

He reminded that "Bolton, who convinced the boss to order you to cease US participation” even acknowledged that the process is not "simple", automatic or snappy. But intentionally "complex & lengthy" and that the US is not a participant.

Another Iranian MP had also on Tuesday declared preparation of the parliament to approve the triple-urgency bill to take measures against activation of trigger mechanism.

“The Europeans are playing a hypocritical game about the US attempts to activate the trigger mechanism and their declared policies are different from what they do,” Nasrollah Pejmanfar said, addressing an open session of the parliament.

He noted that the parliament should study the bad cop and good cop game launched by the US and the Europeans against Iran more thoroughly.

“The parliament has prepared a triple-urgency bill in this regard to adopt appropriate actions against the Europeans and Americans’ mischievous collaboration,” Pejmanfar said.

Pompeo claimed that Washington delivered a letter to the UN for snapback invocation against Iran to bring back sanctions in 30 days.

Commenting on restoration of sanctions against Iran, Pompeo added, "We are confident that the trigger mechanism will be implemented against Iran".

This is while, France, Germany and the United Kingdom (E3) announced in a statement that they will not support the US snapback mechanism which is incompatible with the current efforts to support JCPOA.

The United Nations Security Council resoundingly rejected last month the second US bid to extend an arms embargo on Iran, which is due to expire in October.