TEHRAN (defapress)- Suicides among active-duty members of the United States Army increased by 30 percent in the six months since the onset of the COVID-19 pandemic, matching an overall rise in violent behavior among almost all branches of the military.
News ID: 82136 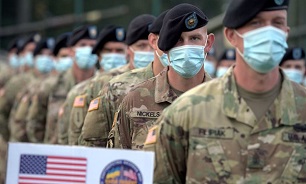 US military suicides spiked by about 20 percent this year compared to 2019, despite the first three months of the year having seen a drop in self-inflicted violent behavior and murders, Newsweek reported.

The Army, the largest branch of the military, recorded 114 suicides since March, prompting several officers and generals to suggest the added stress, isolation and uncertainty of the coronavirus pandemic has taken a toll on its members. Mental health specialists said they saw a corresponding uptick in referrals among veterans since the pandemic started.

Veterans and military leaders urged troops to watch out for their fellow service members, particularly wounded warriors who may be even less inclined to reach out for medical or mental health help amid infection concerns. A 2018 report on US military suicides found young enlisted men were the most at-risk for suicide and used a firearm in 60 percent of incidents.

The Pentagon declined to respond to the Associated Press' 2020 pandemic report released Sunday, but senior leaders and veterans from the Army, Air Force and National Guard confirmed the sudden rise in suicides among active-duty members. Army leaders said it's difficult to directly pin the many causes of suicide on any one thing, but that the pandemic has hurt efforts to bring its members together.

"I can't say scientifically, but what I can say is—I can read a chart and a graph, and the numbers have gone up in behavioral health related issues," Army Secretary Ryan McCarthy said in an AP interview published Sunday.

"We cannot say definitively [the spike in suicides and murders] is because of COVID. But there is a direct correlation from when COVID started, the numbers actually went up," McCarthy added.

Army Chief of Staff Gen. James McConville and Army Sgt. Maj. Michael Grinston said their units have kickstarted "stand-up" days, in which commanders set aside time for soldiers to get to know each other in addition to allowing more activities where families can intermingle and connect. Both men said the isolation of quarantine, particularly among veterans and the wounded, have exacerbated an already difficult situation for many. Officers hope to reduce the length of deployment for troops, which was stretched out to 11 months because soldiers had to quarantine for two weeks at the beginning and end.

"COVID adds stress," said Gen. Charles Brown, the Air Force chief, in recent remarks made publicly, adding, "from a suicide perspective, we are on a path to be as bad as last year. And that's not just an Air Force problem, this is a national problem because COVID adds some additional stressors—a fear of the unknown for certain folks."

There were 98 suicides among active duty and reserve members of the Air Force as of September 15, which is the same as last year. But the report notes that 2019 saw the most suicides among Air Force members in 30 years. Defense Department data shows the number of suicides across the military increased from 511 in 2017, to 541 in 2018.

One positive note identified in the AP report was an increase in military members reaching out for help—which some say is at least one benefit of being able to seek behavior health assistance from the privacy of one's home.

"We also think there was a reduction in the stigma of seeking behavioral health because you can do it from the privacy of your home," said Roger Brooks, senior mental health specialist at the Wounded Warrior Project.

The Navy is believed to have experienced a slightly lower suicide rate this year, although officials declined to confirm or comment to Newsweek Sunday.