TEHRAN (defapress) – Stating that there wont be any military action against Iran, Commander of the Islamic Revolution Guard Corps Major General Hossein Salami said that Iran buried the US political aspirations for West Asia.
News ID: 82138 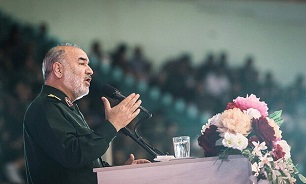 "There is no doubt, the war that was imposed on us was a world war," said Salami at the open session of Iran' Parliament on Tuesday, adding, "As we know although the military arena of the war was the border lines between the Islamic Republic of Iran and Iraq, the political reasons of this war was a global one."

"All the great powers that were unparalleled empires in the history of human life and their regional partners formed an unknown and practical coalition against Iran," he noted.

Salami highlighted, "There is no doubt that the economic support of the Iraqi regime in the war was a global economic support, and all the great powers provided Iraq with all the modern and advanced weapons. The countries, including Britain, Germany, France, Austria, the Soviet Union and the United States provided all their military equipment to Iraq."

"The Iran-Iraq war was the most unequal war in history after Ashura as all the world powers stood against Iran," he added, saying, "War is a very precise and calculable phenomenon, and whoever is stronger wins, and victory is made by someone who can steer the equation of war and change it to his advantage."

Elsewhere in his remarks, Salami referred to US hostile actions and unilateral sanctions against Iran, said, "We have prevented enemy from thinking about a military attack on Iran and provided the capacity to defeat it at any scale of the war."

Iran buried the US political aspirations for the West Asia (Middle East),he added, saying that Iran has forced US to erosion of power.

"The path to our happiness never passes through interaction with the enemy, and no enemy does anything for the happiness of his enemy," Salami said, adding, "The US resentment is permanent and is part of nature of this arrogant system."

"The issue of compromise is a political deception, and it is declared by the evil powers for weakening the will of nations," he noted.