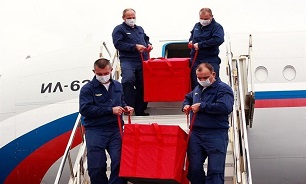 "Sputnik V is already here! We are the first country in the Western Hemisphere to begin phase 3 of the clinical trials of this vaccine against COVID-19. On behalf of the Venezuelan people, I thank President Vladimir Putin and the Russian people for their solidarity," he wrote on Twitter on Friday, TASS reported.

On Friday morning, the first batch of the Sputnik V coronavirus vaccine arrived in Venezuela. About 2,000 Venezuelans will participate in clinical trials of the vaccine, according to the authorities. The country's Vice President, Delcy Rodriguez, noted that Venezuela also plans to launch production of the vaccine on its territory.

On August 11, Russia became the first country to register a coronavirus vaccine, which was named Sputnik V. Russian Health Minister Mikhail Murashko said the vaccine created by the N. F. Gamaleya Federal Research Center for Epidemiology and Microbiology had shown its effectiveness and safety on the outcomes of clinical trials. It was created on a platform that had been used for the development of a number of other vaccines. On August 15, the Russian Health Ministry announced the launch of vaccine production.

In August, head of the Russian Direct Investment Fund Kirill Dmitriev said that Russia had received a request for the production and supply of 1 bln doses of the Sputnik V vaccine from 20 states.