'We Shouldn't Have' Second Debate If Trump Still Has COVID-19

TEHRAN (defapress) – Former US Vice President Joe Biden said Tuesday he and President Donald Trump should not go ahead with next week's presidential debate if Trump still has COVID-19.
News ID: 82215 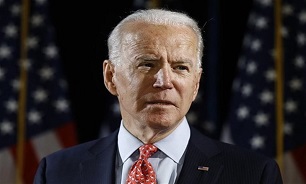 Biden, who clashed with Trump at a chaotic first debate last week, told reporters at an airport in Hagerstown, Md., that the pair's second scheduled faceoff should follow protocols from health officials.

“I think if he still has COVID, we shouldn’t have a debate,” Biden said of Trump, who was diagnosed with the disease last Thursday.

“I think we were gonna have to follow very strict guidelines. Too many people have been infected. It’s a very serious problem, so I will be guided by the guidelines of the Cleveland Clinic and what the docs say is the right thing to do,” he added.

The prospect of holding the next two debates between Biden and Trump, scheduled for Oct. 15 and Oct. 22, was thrown into question after the president announced last week that he and first lady Melania Trump tested positive for the coronavirus.

Since then, several White House officials and members of Trump’s reelection campaign, as well as outside advisers, have been diagnosed with the illness.

The two presidential contenders did not make any physical contact at the first debate last week, and their podiums were spaced about 12 feet apart.

Still, Fox News host and debate moderator Chris Wallace said last week that Trump arrived too late to be tested on-site for COVID-19, and members of his family and campaign did not wear masks throughout the event, fueling worries over the possible spread of the virus throughout the venue.

Biden has tested negative for the coronavirus three times since Trump's announcement on Friday, though it could be two weeks since exposure for a positive test result to be returned.

Trump left Walter Reed National Military Medical Center on Monday after a four-day stay to receive treatment for COVID-19. He said he felt well and returned to downplaying the seriousness of the pandemic, comparing the virus to the common flu, which statistics show is less deadly than COVID-19.

The president’s reelection campaign maintained Tuesday that Trump intends to attend both of the remaining two debates.

"The President intends to participate in the debate in person," the campaign's communications director, Tim Murtaugh, said in a statement to The Hill.

Biden said he looks forward to debating Trump, adding he hopes “all the protocols are followed.”