TEHRAN (defapress)- The Greece's Foreign Ministry condemned Turkey's decision to send a research ship to the Eastern Mediterranean sea as a "direct threat to regional peace and security", according to an official statement cited by AFP.
News ID: 82266 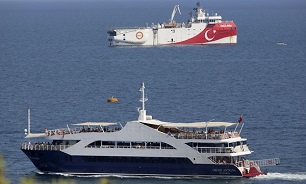 The statement comes as Turkey has announced that it will send its research ship Oruc Reis back to the Mediterranean Sea gas field after it initially returned to the country's shores following a political escalation between Ankara and Athens.

On Sunday, the Turkish navy confirmed that the country would continue its research activities in the area until October 22, according to information shared through the NAVTEX alert system.

"The new Turkish NAVTEX on surveys South of Kastellorizo within the Greek continental shelf, at a distance of just 6.5 nautical miles from Greek shores, is a major escalation," the Greece's Foreign Ministry announced.

Last week, Greek Foreign Minister Nikos Dendias met with his Turkish counterpart Mevlüt Çavuşoğlu in Bratislava as a part of GLOBSEC forum, the first high-profiles talks between the two powers since the East Med tensions resumed between the two this summer. During the meeting, Turkey committed to setting a date for talks on exploratory rights in the area.

The Greek FM noted that Turkey's decision to send the ship back to the disputed waters showed that the country was "unreliable".

"We call on Turkey to recall its decision", Greece insisited.

In August, tensions between Turkey and Greece rose to a new height after the Oruc Reis, a Turkish gas exploration ship, entered disputed waters in the East Mediterranean, accompanied by warships. Ankara insisted that the ship had been tasked with carrying out "seismic activity" research in the waters, to which Greece claims to have exclusive rights.

The move was condemned by Greece and the European Union, with Brussels threatening Turkey with sanctions in relation to its drilling activities, which were deemed "illegal" by EU officials.

In September, the Oruc Reis made its way back to Turkey, but the country's Defence Minister Hulusi Akar stated at the time that the move wasn't intended as a signal that Ankara was "giving up" its "rights" to the resources in the territory. Rather, Akar insisted, the ship's return was a part of scheduled operations as there will be "planned movements backwards and forwards”.