TEHRAN (defapress) – Tensions between Anthony Fauci and US President Donald Trump are increasing after the country’s top infectious disease expert asked the Trump campaign to take down a new ad that features comments of his that he says were taken out of context.
News ID: 82271 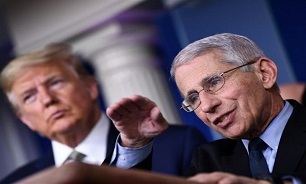 In the 30-second spot, Fauci is heard saying, “I can’t imagine that anybody could be doing more.”

Fauci this week said his remarks, taken from a March interview, were in reference to fellow members of the White House coronavirus task force and other public health officials.

"In my nearly five decades of public service, I have never publicly endorsed any political candidate. The comments attributed to me without my permission in the GOP campaign ad were taken out of context from a broad statement I made months ago about the efforts of federal public health officials," Fauci said in a statement Sunday.

During an interview with CNN's Jake Tapper the following day, Fauci said he thinks the campaign should take down the ad.

"I think it's really unfortunate and really disappointing that they did that," Fauci said.

"It is so clear that I am not a political person, and I have never either directly or indirectly endorsed a political candidate, and to take a completely out-of-context statement and put it in ... A political campaign ad, I thought, was really very disappointing," Fauci said, The Hill reported.

The rebuke from Fauci comes as the president has repeatedly meddled with decisionmaking at the Food and Drug Administration and the Centers for Disease Control and Prevention (CDC), often without much if any pushback from those agencies.

Trump has also lashed out at those agency heads, undermining their public messaging.

Fauci's comments, however, mark the second time in as many weeks that he has publicly distanced himself from Trump.

During the first presidential debate, on Sept. 29, Trump suggested that his health officials have changed their minds about the benefits of masks during the pandemic, noting that the CDC has not always recommended the use of face coverings.

"Dr. Fauci said the opposite. He very strongly said masks aren't good, and then he changed his mind. He said masks are good," Trump said.

Fauci said later that week that his stance on the benefits of face masks was "taken out of context" and that the initial recommendation against widespread use of masks was due to a shortage for health providers.

He said scientists quickly changed their recommendations after realizing the extent to which asymptomatic spread was contributing to COVID-19 infections.

The Trump campaign's use of Fauci's remarks underscores how, more than six months into the pandemic, he is still viewed as a trusted source of information on the pandemic, in contrast to the president, who has faced harsh criticism throughout.

Amesh Adalja, an infectious disease expert at the Johns Hopkins University Center for Health Security, said he can understand why the Trump campaign would want to imply an endorsement from Fauci.

"Dr. Fauci is a valuable resource and a world-renowned expert, so people will try to have his reputation kind of shower on to them, even when it's undeserved," Adalja said.

Yet given Trump's propensity to lash out and contradict even his own experts, Adalja said it was "baffling and paradoxical" that Trump would want that message in his ads.

The latest dispute between Fauci and Trump also underscores what’s been a complicated relationship throughout the pandemic.

As Trump spent much of the spring and summer downplaying the extent of the pandemic, Fauci sounded the alarm, at times directly contradicting the president.

In July, Trump publicly mused about Fauci's high favorability ratings when his were so low.

Fauci has also come under attack from some of Trump's aides and surrogates, with the White House at one point providing a memo to reporters detailing all the “wrong” statements Fauci had made about the pandemic.

Mark Rosenberg, an epidemiologist who ran the CDC’s National Center for Injury Prevention and Control from 1994 to 1999, said he thinks Fauci has deftly walked a fine line between speaking up for science without openly criticizing Trump.

"I think he was critical of the people who put the ad together. I don't think he personalized it ... and said this was President Trump's fault. I think he has found a way to stand up without incurring the wrath of Donald Trump," Rosenberg said.

Rosenberg added that he isn't worried people might lose confidence in Fauci because of the ad since its clear Fauci is being used.

But with Trump trailing Democratic presidential nominee Joe Biden in national and key battleground state polls, in large part because of his handling of the coronavirus pandemic, Rosenberg said it's likely Trump's relationship with Fauci could deteriorate if those poll numbers decline further.

"The relationship will get worse, but I don’t think Trump will fire Fauci," Rosenberg said, arguing a drastic action like that would just serve to highlight more of Trump's failures.