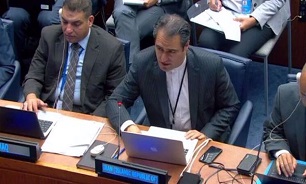 Iran’s Permanent Envoy to the UN General Assembly First Committee (also known as the Disarmament and International Security Committee) Heidar Ali Balouji said Riyadh’s reluctance to implement the IAEA safeguards regime comes as the country’s surreptitious program enables it to conceal its nuclear activities far from the eyes of the IAEA.

“Concerns about Saudi Arabia’s leaked nuclear activities and identification of its nuclear sites hidden in desert require international collective efforts, so much so that Saudi Arabia be held accountable for the consequences of its behaviors,” he said.

“A steady and not selective implementation of the Safeguards will serve the international community in the long run,” Balouji noted.

The diplomat added that the world should ask Riyadh to fully implement the Comprehensive Safeguards Agreements without any delay.

He made it clear that a halt of international nuclear assistance for Saudis would be the only way to remove the plenty of concerns over their stealthy activities.

Balouji went on to say that lack of transparency in Saudi regime’s activities is definitely in violation of the whole Safeguards regime.

Saudis’ surreptitious nuclear program, which had been revealed by whistle-blowers, was recently confirmed by satellite images showing a huge compound, in a very suspicious location in the middle of the desert, a checkpoint, towering security fences, a big building about 150 feet on a side and pools for the collection of uranium waste; a typical blueprint for yellow-cake mills.

The Wall Street Journal exposed the facility constructed in a remote area in the country for extracting uranium yellow-cake from uranium ore.

Observers say such furtive nuclear capabilities in the hands of the Saudis are extremely worrying, given the appalling Saudi human rights record in their genocidal war in Yemen and throwing their all-out support for terrorist groups and organizations in West Asia and beyond.

In relevant remarks in August, Iranian Ambassador and Permanent Representative to Vienna-Based International Organization Kazzem Qaribabadi urged IAEA to conduct a transparent probe into Saudi Arabia's very hidden nuclear program and present a report to the members as the country has gained notoriety as the main supporter of terrorist groups in the region.

He made the request following release of information on the country's move to build yellow cake producing factory.

Qaribabadi said that Saudi Arabia has no research reactor to seek production of yellow cake, noting that the issue, along with Riyadh’s non-transparent actions in the nuclear field and the denial of access to IAEA inspectors, as well as its destabilizing activities in the region, raise serious concerns about a secret nuclear weapons program in the country.

Despite the fact that Saudi Arabia is an NPT member, it still refuses to accept the IAEA’s safeguards inspections, and despite repeated requests by the Agency for several years, it has not amended its obligations so as to allow the inspectors in, the envoy reiterated, the envoy further said.

He emphasized that governments and the IAEA must make it clear to Saudi Arabia that the international community will not counter any deviation from a peaceful nuclear program.

If the Saudis seek peaceful use of nuclear energy, they must accept relevant obligations under the IAEA and act in full transparency, Iran's envoy said.