TEHRAN (defapress) – Iranian Judiciary Chief said that resistance of the noble nation of Iran foiled all conspiracies orchestrated by enemies against the country.
News ID: 82354 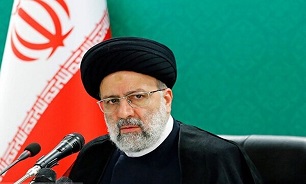 Speaking among senior deputies and directors of IRGC’s Intelligence Organization on Thu., Ayatollah Seyyed Ebrahim Raeisi said that enemy left no stone unturned to carry out psychological operations against the country and weaken the Establishment with political, cultural and economic sanctions but Iranian nation resisted against all these conspiracies and thwarted enemies’ malicious plots.

The judiciary chief pointed to the effectiveness of Islamic Revolutionary Guards Corps (IRGC) in producing power, bringing about dignity and authority for the Islamic Republic of Iran and Islamic world and added, “Key role of soldiers and security forces of the Organization, who are responsible for protecting and safeguarding this great source of honor and power, is doubly important and more sensitive.”

Safeguarding and preserving the Establishment is the main mission of IRGC, he emphasized.

Elsewhere in his remarks, he pointed to the clarification of plots and conspiracies waged by enemies against the Islamic Revolution and stated, “Today, enemy seeks to create despair and hopelessness within the Establishment but whenever enemies have taken action against the Islamic Republic of Iran, they (enemies) have failed in achieving their malicious objectives.”