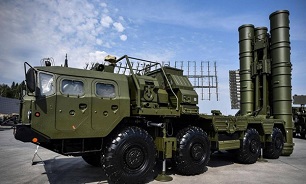 "The US Department of Defense condemns in the strongest possible terms Turkey's October 16 test of the S-400 air defense system," Pentagon spokesman Jonathan Hoffman said in a statement, AFP reported.

"We object to Turkey's testing of this system, which risks serious consequences for our security relationship," Hoffman said, adding, "We have been clear and unwavering in our position: an operational S-400 system is not consistent with Turkey's commitments as a US and NATO Ally."

"Turkey has already been suspended from the F-35 program and the S-400 continues to be a significant barrier to progress elsewhere in the bilateral relationship," Hoffman said.

The US State Department issued a condemnation last week after reports of the test, following repeated warnings over possible sanctions if the S-400 system was activated.

Erdogan told reporters in Istanbul that tests had been carried out and would continue.

"We're not going to ask America for permission," he said.

Ankara has accused Washington of failing to sell it the competing American Patriots and points to its security needs for purchasing the Russian system.