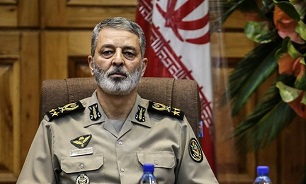 “The air defense units in Northwestern Iran have been reinvigorated and more equipment will join them if necessary. Tranquility of people is of special importance to us,” General Mousavi said on Tuesday.

“Respect for the countries’ territorial integrity and protecting the internationally-recognized borders is among our known principles and we will not tolerate any change in them and we are opposed to any change,” he added.

General Mousavi also warned that the Iranian Armed Forces will show a strong and crushing response to any Takfiri and ISIL terrorists and Zionist that appears at the country's bordering areas.

Commander of the Border Guards of the Islamic Republic of Iran Police Brigadier-General Ahmad Ali Goudarzi announced on Saturday tightened security measures at the Northwestern bordering areas of the country after several misfire incidents during the Karabakh war between Azerbaijan and Armenia.

He said that at present sustainable security prevails at all bordering areas of Iran, describing the situation as “desirable and proper”.

General Goudarzi referred to several mortar rounds which have hit the Iranian bordering areas during the Karabakh war in the past few weeks, and said both Azerbaijan and Armenia were cautioned against repetition of such incidents and their border guards authorities were summoned and received notifications.

Last week, Spokesman for the Iranian Armed Forces Brigadier General Abolfazl Shekarchi warned Armenia and the Azerbaijan Republic to avoid crossing Iran’s red lines, stressing that their dispute can be resolved through dialogue.

Last Wednesday, a rocket fired during clashes between the warring sides, Armenia and Azerbaijan, landed in a village house in the Northeastern bordering province of East Azarbaijan in Iran.

“A rocket fired during the Karabakh conflict between the Republic of Azerbaijan and Armenia hit a house in the village of Ozan of Manjavan district of the town of Khoda Afarin about 12:00 today,” Governor of Khoda Afarin Ali Amiri Raad said on Wednesday.

He added that the rocket damaged the house but did not leave any casualties, noting that the military and security forces are present on the scene to investigate the incident.

In another incident last Tuesday, a drone most likely belonging to the warring sides of Azerbaijan and Armenia crashed near a village in East Azarbaijan province in Northwestern Iran.

“The drone crashed this morning in national and grassland areas near the village of Qara Qouch in Manjavan district,” Amiri Raad said on Tuesday.

He added that the incident did not leave any damage or human casualty, and noted, “Military experts are investigating to find who owns the drone and the region it took off.”

Earlier this month, another drone had came down inside Northwestern Iranian territories along Iran’s borders with Azerbaijan as the war between Baku and Yerevan entered its seventeenth day.

The drone crashed while flying over a village in the border county of Pars Abad Moghan.

In addition to the drones, several rockets and mortar shells have also earlier landed inside Iran over the past few weeks, prompting Iran to formally warn the two warring sides against violating the Iranian border.

“Movements in the border areas of our country are being seriously and sensitively monitored by the Islamic Republic of Iran, and in this regard, while declaring any attack by any of the warring parties in the region on our country is intolerable, we seriously warn all parties to seriously take care in this regard,” the Iranian Foreign Ministry said in a statement.

Iran has called on Azerbaijan and Armenia to immediately cease the war and resolve their differences through dialogue, expressing readiness to facilitate such a dialogue.

“Iran is closely monitoring the alarming violence in Nagorno-Karabakh. We call for an immediate end to hostilities and urge dialogue to resolve differences. Our neighbors are our priority and we are ready to provide good offices to enable talks. Our region needs peace now,” tweeted Foreign Minister Mohammad Javad Zarif shortly after Armenia and Azerbaijan began the war.

Azerbaijan and Armenia engaged in heavy fighting over the disputed Nagorno-Karabakh region on Monday, with both countries ignoring a renewed truce that was meant to come into effect at the weekend.

The truce was agreed on Saturday after a similar deal brokered by Russia a week earlier failed to halt the worst fighting in the South Caucasus since the 1990s.

In both instances, Armenia and Azerbaijan accused one another of breaking the truce within hours of agreed deadlines.

More than 1,000 people have been killed since fighting began on September 27, including hundreds of soldiers and dozens of civilians.

Karabakh is inside Azerbaijan but has been controlled by Armenia-backed troops for more than 25 years.

The failure to halt renewed fighting has raised fears of all-out war and humanitarian crisis, while the conflict puts fresh strain on ties between Turkey, which strongly backs Azerbaijan, and its Western allies in NATO.

While Turkey has called for a ceasefire, countries such as France and Germany have criticised Ankara for its fervent and vocal support of Baku in the fight.

Russia, which has a defence pact with Armenia and sells weapons to both rival countries, could also be at risk of being embroiled into a regional war.

The first truce brokered in Moscow earlier this month was aimed at letting the sides swap detainees and bodies of those killed in the clashes, but it had little effect on the fighting around the enclave.

The latest truce was announced after Russian Foreign Minister Sergey Lavrov talked to his Armenian and Azeri counterparts by telephone and called on sides to observe the truce that he mediated a week ago.

Russia, France and the United States jointly chair a body called the Minsk Group, which has attempted to help resolve the conflict under the umbrella of the Organization for Security and Co-operation in Europe (OSCE).

UN Chief Antonio Guterres has called on Armenia and Azerbaijan to “fully abide” by the new truce, his spokesman said.