TEHRAN (defapress) – Former US President Barack Obama offered a seething rebuke of Jared Kushner after the White House senior adviser a day earlier said that for President Trump’s economic policies to work, Black Americans had to “want to be successful.”
News ID: 82395 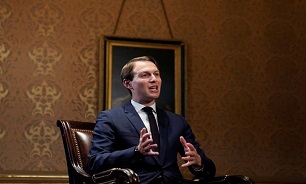 "(Kushner) says Black folks have to want to be successful," Obama said at a drive-in rally in Orlando for Joe Biden, his former vice president and the Democratic presidential nominee, on Tuesday “Who are these folks? What history books do they read? Who do they talk to?"

Obama also chided Trump over his assertion that he’s done more for Black Americans than any president since Abraham Lincoln, who dissolved the institution of slavery.

“He loves to talk about Black unemployment” Obama said. “Unemployment was really high when I came in and we brought that unemployment low and it kept on going low and he wants to take credit for it.”

The former president's appearance on the campaign trail in swing state Florida was his second in-person stump for Biden. Obama spoke to a similar type of event outside of Lincoln Financial Field in Philadelphia last Wednesday.

Trump and his campaign have often pointed to the record-low Black unemployment rate that was reached in late 2019 prior to the coronavirus pandemic.

Kushner, who is also Trump’s son-in-law, made the comments during a Fox News interview where he was asked about the White House meeting with rapper Ice Cube about policies that would bring more equity to Black communities around the country.

“One thing we’ve seen in a lot of the Black community, which is mostly Democrat, is that President Trump’s policies are the policies that can help people break out of the problems that they’re complaining about,” Kushner said. “But he can’t want them to be successful more than they want to be successful.”

“What you’re seeing throughout the country now is a groundswell of support in the Black community because they’re realizing that all the different bad things that the media and the Democrats have said about President Trump are not true and so they’re seeing that he’s actually delivered,” Kushner added.

Despite his campaign’s efforts to sway Black voters, Trump has trailed Biden by a significant amount with the crucial voting bloc the entire cycle. In a New York Times-Siena poll released last week, 90 percent of Black respondents said they were or had already voted for Biden, while just 4 percent said the same for Trump.

Following the backlash sparked by Kushner’s words, White House press secretary Kayleigh McEnany said Monday that “internet trolls” took the comments “out of context as they try to distract from President Trump’s undeniable record of accomplishment for the Black community.”

The White House on Tuesday pushed back on Obama's comments in a statement to The Hill.

“Not only is the former president taking Senior Adviser Jared Kushner out of context, he’s trying to take credit for President Trump’s undeniable record of accomplishments for the Black community,” White House assistant press secretary Jalen Drummond said. “President Trump is the one who has actually delivered for Black Americans with record-low unemployment, criminal justice reform, Opportunity Zones, access to capital, and historic funding for HBCUs unlike Democrats who are all talk, no action.”