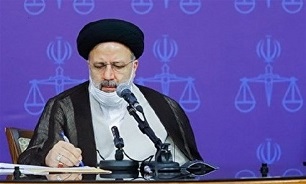 In a meeting with Syria’s outgoing ambassador to Tehran on Wednesday, Raeisi denounced the harsh economic and psychological war that the enemies have waged against people of Syria.

“The cruelty of the enemy which has imposed sanctions even on vital goods needed by the Syrian and Iranian people is definitely a crime against humanity,” the Judiciary chief stated.

He further underscored that the economic war has failed to force Iran or Syria to surrender, saying such hostile plots have only brought more disgrace on the enemies and strengthened the resistance.

Describing resistance as the best and most effective strategy in the region, Raeisi underlined that active resistance will result in the liberation of not only the Golan Heights, but the whole occupied territories.

In June, the US State Department and the Treasury said 39 Syrian individuals, including President Bashar al-Assad and his wife, had been designated for a load of new economic and travel sanctions.

The law, known as the Caesar Act, places anyone who does business with the 39 named individuals and government entities in the cross hairs of the US Treasury.

Iran had condemned the US sanctions against Syria as an act of economic terrorism that threatens the lives of innocent civilians.