TEHRAN (defapress) – The Islamic Republic of Iran Air Force (IRIAF) has furnished its RF-4 military jets with advanced homegrown cameras and they have been carrying out reconnaissance operations in a war game underway in central Iran, a spokesman said.
News ID: 82437 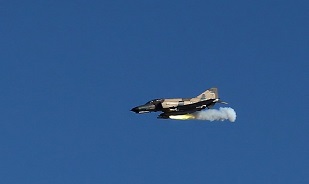 The main stage of the ninth edition of the annual aerial drill, codenamed Fadayeeyan Harim Velayat, started in the central province of Isfahan on Monday.

Speaking to reporters, the spokesperson for the war game said local experts have equipped the RF-4 reconnaissance aircraft with “Samat” cameras, an advanced optical device manufactured by the Air Force.

The war game gives the message of peace, stability, friendship and sustainable peace to the regional countries, the general noted, but warned the enemies that Iran stands ready for a crushing response to any miscalculation.