TEHRAN (defapress) – Iran’s deputy foreign minister says the initiative proposed by Tehran over the ongoing Nagorno-Karabakh conflict can hugely contribute to the resolution of the dispute.
News ID: 82438 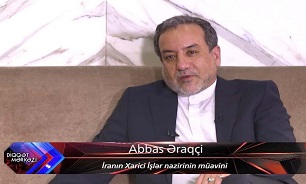 In a Sunday interview with ITV (Social Television Network) of the Republic of Azerbaijan, Abbas Araghchi elaborated on Iran’s initiative, saying that it is based on several internationally accepted principles, including respect for sovereignty, territorial integrity, the principle of inviolability of borders, ending the occupation, respecting minority rights and the return of refugees.

"The initiative has been drawn based on a realistic view, a regional approach and the participation of influential countries in the region."

This plan, with a regional partnership, aims to resolve this issue and help the two sides achieving their demands, he added.

Araghchi, who is Iran's special envoy for the settlement of the Nagorno-Karabakh conflict, underlined the necessity of a collective effort in this regard, adding, "Iran's proposal has been made in good faith and seeks to end human and non-human casualties in the Nagorno-Karabakh region."

"If all parties are in good faith and the intervention of some countries outside the region that seek to destroy relations is prevented, we can reach a conclusion."

He once again reiterated Tehran’s support for the territorial integrity of the Republic of Azerbaijan and stressed the need for liberation of the occupied territories.

“This support has not changed over the past 27 years," Araghchi added.

The Iranian diplomat called for observing human rights during the conflict, saying it is not acceptable to attack civilian sites and target innocent civilians in the dispute.

He also dismissed all the claims about Iran's sending weapons and military forces to Armenia, noting that Iran has closed its borders with Armenia since the beginning of the new round of conflicts and has not allowed the transfer of weapons to the parties to the conflict.