Iran envoy to IAEA says US source of many world's problems

TEHRAN (defapress) – Iran’s Permanent Ambassador to Vienna-based International Organizations termed the US as a "big problem" that has brought many suffering to the world.
News ID: 82455 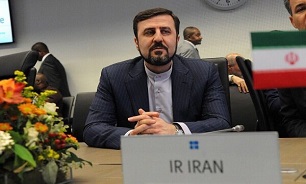 The main reason for US hostile moves against the Islamic Republic of Iran is that the country doesn’t succumb to US oppressive policies, Kazem Gharibabadi wrote in his Instagram account on Tuesday.

Such enmities will end only when Americans accept the fact that, in no way, they can’t harm the interests of Iranian nation and government, he said, adding, “Today, the US credibility has declined not only in the Islamic world but also in Europe and the Western world.”

He also asserted that in addition to problems such as the threat of war, insecurity, sanctions, and terrorism, the world suffers from a big problem, called the United States, which itself, is the source of many problems in the world.

Stating that America is the tyrant of the era, he said, "Whoever elected as the president of the United States, Iran’s policies will not be influenced."