Trump Responds to Biden Victory: Election 'Far from Over'

TEHRAN (defapress) – Shortly after American media called the presidential election for former Vice President Joe Biden, Donald Trump released a statement claiming the election was "far from over," vowing to take the election to the courts.
News ID: 82485 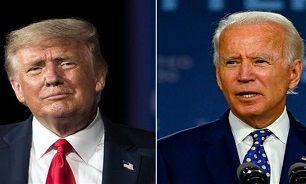 Trump was at his golf course in Virginia when a slew of networks announced Biden had won the presidency. The AP and networks only call a race when they determine the trailing candidate has no possible path to victory, even factoring in the votes that remain to be counted.

Hours later, the US president issued an all-caps tweet declaring himself the winner and claiming that election observers were not allowed into counting rooms. In fact, vote counting was observed as normal and, in many cases, livestreamed as well. There have been some disputes over how close observers could stand or how many were permitted in rooms, but nothing close to the violation of election laws that Trump alleges, NPR reported.

He tacitly acknowledged the lack of evidence for his campaign's unsupported claims of widespread fraud, saying, "BAD THINGS HAPPENED WHICH OUR OBSERVERS WERE NOT ALLOWED TO SEE."

He also noted he had received more votes than any sitting president had ever received before, which is true; Biden, however, received millions more votes, setting the new record for most votes ever received in a presidential election.

The presidential race is always called by the media well before it is officially certified. Certification deadlines vary by state but are set days or weeks after Election Day. The AP and networks often call the race on election night.

As had been anticipated, tallying votes took longer than usual in many states: Huge numbers of voters cast their ballots via mail, because of the pandemic, and many state legislatures did not allow those mail-in votes to begin to be counted until Election Day.

The AP determined that Biden reached the threshold of 270 electoral votes on Saturday morning, as he secured the crucial swing state of Pennsylvania and its 20 electoral votes for Biden. Shortly after, the AP also called Nevada for Biden, bringing his electoral vote total to 290.

Biden leads in Georgia, while Trump has the edge in North Carolina, neither of which have been called by the AP; neither state would swing the result of the election at this point. Counting also continues in Arizona, which the AP called for Biden earlier in the week and where Biden maintains a narrow edge.

In his statement, Trump reiterated claims that votes are being counted improperly. He also emphasized his campaign's legal challenges to the voting process, several of which have already been thrown out of courts because of a lack of any evidence of wrongdoing.

"We all know why Joe Biden is rushing to falsely pose as the winner, and why his media allies are trying so hard to help him: they don't want the truth to be exposed," Trump wrote. "The simple fact is this election is far from over. Joe Biden has not been certified as the winner of any states, let alone any of the highly contested states headed for mandatory recounts, or states where our campaign has valid and legitimate legal challenges that could determine the ultimate victor."

Many of those lawsuits focus on questions of transparency and access to observe vote counting — for instance, disputing how far away an election observer can stand from officials. It is not clear how such a legal challenge could shift the results of the election.

Trump also referred to "legal votes" and "illegal ballots." He has frequently suggested mail-in ballots are illegitimate. Research has found no evidence of widespread fraud, and states with Republican and Democratic election officials have used the voting method for years without major issues. Trump himself has voted by mail.

Trump also accused the president-elect of seeking to count ballots "even if they are fraudulent." The Biden/Harris campaign has not encouraged any violation of election laws.

Just a few hours earlier, the president had tweeted that he had won the election, a message flagged by Twitter.

It should be noted that concession speeches don't have any legal force, and Biden will be the next president regardless of whether Trump concedes or not.

"How exciting it is to come before you today with Joe Biden having the tremendous mandate that he has," she told reporters on Capitol Hill. "And that pretty soon the hyphen will be gone from vice president to President-Elect Joe Biden — a happy day for our country."

"I've already covered the subject," McConnell said, noting, "I sent out a tweet this morning." But McConnell's tweet did not address the president — it said "every legal vote should be counted." When pressed, McConnell said, "I've told you I have sent out what I want to say about this situation in the tweet you all have" and "I get to decide what I say."

Some fellow Republicans in the Senate have been more direct.

"The president's allegations of large-scale fraud and theft of the election are just not substantiated. I'm not aware of any significant wrongdoing here," Toomey said.

In a tweet on Friday, Utah Sen. Mitt Romney wrote that the president was "within his rights to request recounts," but added that it is "wrong to say that the election was rigged, corrupt and stolen — doing so damages the cause of freedom here and around the world, weakens the institutions that lie at the foundation of the Republic, and recklessly inflames destructive and dangerous passions."

Romney has since congratulated Biden on his win. So have Republican Reps. Fred Upton and Will Hurd.

On Saturday, Rep. Don Bacon, R-Neb., told NPR that the "handwriting is on the wall" for Trump.

He said the president has the right to file legal challenges concerning voting processes, but once the court battles have played out, the president should "proceed graciously," Bacon said.

However, many of the president's closest Republican allies have not directly pushed back on his unsubstantiated claims of fraud. And on Saturday, several House Republicans, and at least one senator, reiterated the president's claim that the race is not yet over.