TEHRAN (defapress) – Islamic Republic of Iran and Syria stressed on return of Syrian refugees to their homeland.
News ID: 82506 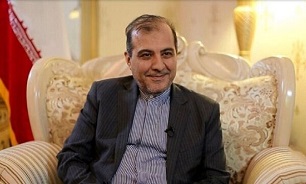 In this bilateral talk, the two sides discussed the latest developments in Syria especially organizing a "Conference of Return of Refugees" and latest activities of Syrian Constitutional Committee as well as issues of mutual concern.

While expressing satisfaction with the expansion of bilateral relations, the sides stressed the humanitarian and political dimensions of the return of Syrian refugees to their country and supported continuation of Syrian Constitutional Committee's activities to resolve Syria’s crisis politically and strengthen peace and stability in the country.

In that talk, Pederson elaborated on the results of his negotiations with the representatives of several regional countries over the issues.

Ali-Asghar Khaji arrived in Syria on Monday at the head of a high-ranking political delegation to hold high-profile talks with senior Syrian officials and also for participating in International Conference of Return of Refugees.