TEHRAN (defapress) – The commander of the Islamic Revolution Guards Corps (IRGC) warned the US that Iran will take revenge for the assassination of Lt. General Qassem Soleimani irrespective of the judicial procedures underway to bring the killers to justice.
News ID: 82547 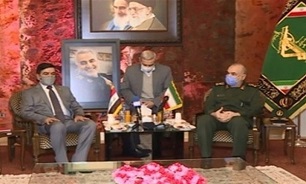 In a meeting with Defense Minister of Iraq Lt. General Juma Anad Saadoun, held in Tehran on Sunday, IRGC Commander Major General Hossein Salami pledged that Iran will certainly take revenge against the killers of General Soleimani “on the field”.

The revenge for the blood of General Soleimani and Abu Mahdi al-Muhandis is separate from the ongoing legal procedures, he added, expressing confidence that Iraqis also seek revenge for those martyrs.

The IRGC commander also stressed the need for the expulsion of American military forces from Iraq under a law passed by the Iraqi parliament.

The Iraqi minister, for his part, praised Iran for supporting his country in the fight against Daesh terrorists.

Saadoun said he has visited Tehran to weigh plans for the enhancement of bilateral ties and fulfill the Iraqi army’s needs with the help of Iran.

In a meeting with Iraq’s prime minister in July, Leader of the Islamic Revolution Ayatollah Seyed Ali Khamenei warned the United States that Iran will definitely reciprocate the assassination of Lt. General Soleimani.

The Leader underlined that the Islamic Republic of Iran will never forget the American assassination of the top commander in Iraq and “it will definitely deal the reciprocal blow to Americans.”

On January 3, a US drone strike near Baghdad International Airport assassinated General Soleimani, former commander of the Quds Force of Iran’s Islamic Revolution Guards Corps. The attack — that also killed Abu Mahdi al-Muhandis, the second-in-command of Iraq’s Popular Mobilization Units (PMU) anti-terror group, along with several others— came while General Soleimani was on an official visit to the Iraqi capital.