TEHRAN (defapress) – Iran’s naval power has grown so extensively that its strategic depth has gone beyond the regional waters and has reached the faraway oceans, Chief of Staff of the Iranian Armed Forces Major General Mohammad Hossein Baqeri said.
News ID: 82644 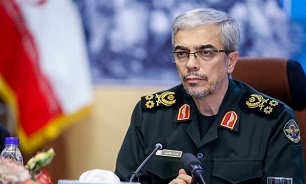 In a message released on Friday in commemoration of the Iranian Navy Day, Major General Baqeri said Iran’s Navy has gained such a major place that its power has shattered the global arrogance and the trans-regional powers’ dream of dominating the security factors in the region.

Describing Iran as the messenger of peace, friendship, and maritime security, the commander said the Iranian naval forces’ capability to carry out major and unique missions have extended the country’s strategic depth “from the Persian Gulf coasts, the Sea of Oman and the northern parts of the Indian Ocean to the distant waters and faraway oceans.”

The Iranian naval forces play sensitive roles as “the anchorage of ultra-regional security”, he added.

The top general finally emphasized that the potential threats make it necessary for Iran to press on with the naval progress with firm resolve and accelerate and broaden its activities.

In February 2018, Leader of the Islamic Revolution Ayatollah Seyed Ali Khamenei urged the Iranian Armed Forces to boost their military capabilities and preparedness in such a way that the enemies would not ever dare think of threaten the country.

The Leader also praised as “great and fabulous” the advances that Iranian military forces, the Navy in particular, have made since the victory of the Islamic Revolution in 1979, saying the Navy’s success in bringing into service homegrown vessels such as the Sahand destroyer or Fateh and Qadir submarines heralds more progress day after day.