TEHRAN (defapress) – Ministry of Defense and Armed Forces Logistics in a statement on the occasion of Iran’s Navy Day said that Islamic Republic of Iran’s naval power is the anchor of stability and security in the region.
News ID: 82650 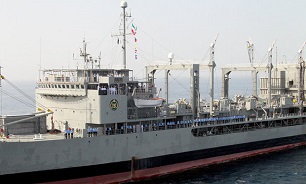 While celebrating Azar 7 (Nov. 27) which coincides with Iran’s Navy Day, the Ministry of Defense reiterated that Iran’s naval power is the anchor of stability and security in the region and emphasized the use of all capacities and capabilities to equip this force.

The full text of the statement is read as follows,

The late founder of the Islamic Revolution Imam Khomeini said, "The navy is a source of honor and dignity for both the Armed Forces and the country. The name and memory of Navy Force, including the devoted martyrs of Peykan Navy Fleet, will always remain in the history of this country.”

Now, more than 40 years have passed since this glorious operation, the reputation of deterrence of the Armed Forces of the Islamic Republic of Iran, especially Iran’s Army-Navy Force has resonated all over the world and all countries in the world acknowledge the undeniable fact that deterrent and naval defense power of the Islamic Republic of Iran is a point of trust and reassurance of the Iranian nation, an anchor of stability and lasting security in the strategic region of the Persian Gulf, the Strait of Hormuz and the Sea of Oman.

Undoubtedly, the epic-makers of Army's Navy Force, under the auspicious recommendations and instruction of Leader of the Islamic Revolution and Commander-in-Chief of the Armed Forces, will safeguard and protect the country and azure shore of the Persian Gulf from enemies' threats like previous with all their might and power.

Iran celebrates Navy Day on November 28, (this year falls on Nov. 27) commemorating the anniversary of Operation Morvarid held by Iran on November 28-29, 1980 during the Iran-Iraq War. During the operation, the biggest Iraqi oil terminal was destroyed, paralyzing more than 50 percent of the combat power of the Iraqi Navy, while the Iranian fleet suffered minor losses.