TEHRAN (defapress) – The Fatah (Conquest) Alliance in Iraq's parliament has deplored the assassination of an Iranian physicist, saying he was martyred by the Zionists’ bullets and those who betray the Islamic Ummah.
News ID: 82688 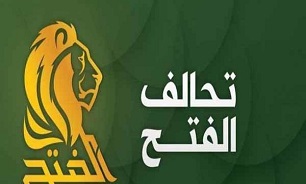 In a statement issued on Monday, Al-Fatah Alliance said, "This coalition expresses its condolences and sympathy to the Islamic Republic of Iran and its resilient officials and nation over the martyrdom of Dr. Mohsen Fakhrizadeh, a top Iranian scientist."

“He was martyred by the bullets of the Zionist mercenaries and their accomplices and traitors to the Islamic Ummah who have turned their backs to the human values ​​and identity of this Ummah,” it added.

The statement referred to the Iranian people as a nation “that taught the world how people can be free and how to create an independent country with patience, awareness and steadfastness," emphasizing, "This crime will never stop the Islamic Revolution from continuing its path in standing firm against the Zionists’ plots and the supporters of the normalization of relations with the Zionist regime.”

The Iraqi Al-Fatah further noted that the heinous move will only increase the determination and cohesion of the wise officials of the Islamic Republic to respond at the right time and place.

Iran’s Foreign Minister Mohammad Javad Zarif says the assassination bears the clear hallmark of atrocities committed by the Israeli regime, which has already murdered a number of Iran's scientific elites.

The Atomic Energy Organization of Iran, the country’s nuclear agency, has likewise suspected Israeli involvement in both the assassination and a July incident at Iran’s Natanz nuclear facility. “It looks like the Zionist regime has a role in these issues,” AEOI Spokesman Behrouz Kamalvandi said on Saturday.