TEHRAN (Defapress) - Head of Khatam al-Anbiya Construction Headquarters Saeed Mohammad said that the second oceangoing oil tanker unveiled by the IRGC on Tuesday was an indication of Iranians’ expertise and capabilities and displayed that outgoing US President Donald Trump's maximum pressure policy has failed.
News ID: 82799 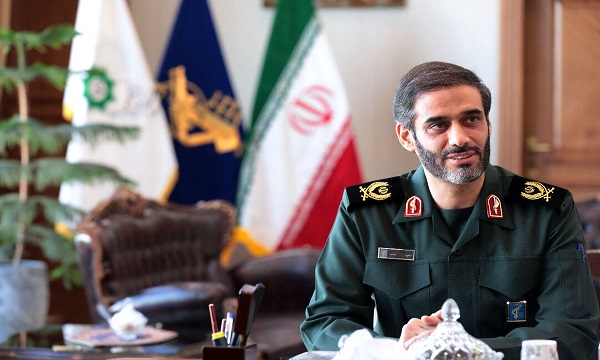 “The ceremony to unveil the oceangoing oil tanker developed by the Iranian experts was a goodbye party for the gambler Trump to make enemies understand that we have been able to unveil and launch the second giant oceangoing oil tanker despite all sanctions with the help of the Iranian experts at Sadra company,” Mohammad told reporters on the sidelines of the ceremony to unveil the vessel in Bushehr in Southern Iran on Tuesday afternoon.

He added that the Aframax tanker, which is capable of carrying 113,000 metric tons of oil (750,000 barrels), has been built by IRGC-affiliated Sadra Company for delivery to a foreign customer through an engineering, procurement and construction (EPC) contract.

He said the ship is the second of its type built by the Islamic Revolution Guards Corps for delivery to foreign customers, adding that the two projects had earned the country nearly 120 million euros in hard currency revenues.

“We have grown self-sufficient in all sections of the marine industry as a result of efforts of the young Iranian specialists, and today, we do not need foreign states for building any type of ship,” Mohammad said.

He said the new oil tanker will set sail before the end of the current fiscal year in late March.

The IRGC’s engineering and construction wing has played a major role in Iran’s infrastructure development in recent years.

The Khatam al-Anbiya headquarters has been behind major projects in Iran’s transportation and energy sectors. Its maritime branch Sadra has been a key contributor to Iran’s push to indigenize manufacturing of oil and gas drilling rigs. Those rigs have helped Iran’s Oil Ministry to significantly boost natural gas output from the sprawling South Pars gas filed in the Persian Gulf.