TEHRAN (Defapress) - Iranian President Hassan Rouhani said Washington has obstructed Iran’s efforts to purchase coronavirus vaccine, and warned officials to control borders to prevent infection of the country’s people with the mutated COVID-19 virus which has spread in the European states.
News ID: 82810 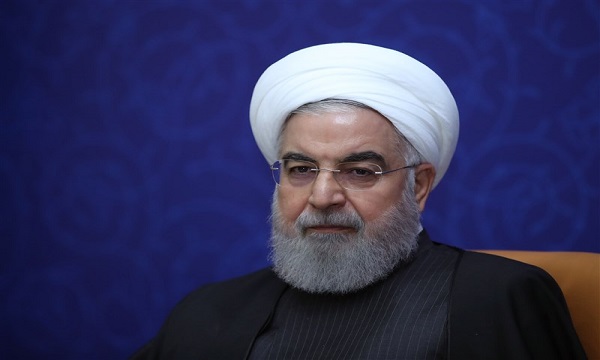 “Iran is definitely looking to make a vaccine and at the same time we are looking to buy an approved vaccine. The Americans rocked the boat, and evil and vicious activity everywhere is on the part of the Americans. We prepared the money, but the World Health Organization said that OFAC (the US Office of Foreign Assets Control) should license the trade,” President Rouhani said on Saturday, addressing a meeting of the national coronavirus campaign headquarters in Tehran.

"How could one trust you. You are notorious for theft and are you are looking for tracing our funds to seize them," President Rouhani said addressing the American officials.

He, meantime, said that based on the guidelines of the Supreme Leader, the government is making its utmost efforts to defuse the US sanctions.

President Rouhani referred to the mutation of coronavirus in a number of European states, specially Britain, and stressed the need for the Iranian officials to impose strict health and hygiene protocols, specially at the borders, to prevent the spread of the new virus to Iran.

Governor of the Central Bank of Iran (CBI) Abdolnasser Hemmati said on Thursday night that nearly 200 million euros have been earmarked to purchase 16.8 million doses of coronavirus vaccine.

"We are doing our best to buy medicine and medical equipment by circumventing the cruel US sanctions, and $2.7 billion have so far been allocated for the purchase of medical equipment and medicine," Hemmati said in a televised program, adding, "Today, in cooperation with the Health Ministry, we have transferred the funds needed to import 16.8 million doses of coronavirus vaccine."

"After 10 days of efforts, we finally sent some 180 million euros to a bank in Switzerland through an American and Korean bank," he continued.

"We were able to send this remittance through three banks in Turkey, Europe and a branch of an Iranian bank with the permission of OFAC, as the Americans have always caused a lot of problems for remittances and we were careful that they do not encroach on our financial resources this time either," the official stressed.

Pointing to the Health Ministry's talks with the Chinese to supply vaccine, he said that whenever an agreement was signed with China, the CBI would provide the money needed to buy the vaccine from them.

Rabiyee added that 200 million euros have been allocated and CBI would provide foreign exchange resources for buying the vaccine as much as necessary.