Iran not to tolerate interference in its nuclear program

TEHRAN (Defapress) - The spokesperson of the Iranian Foreign Ministry said that the Islamic Republic will not tolerate any interference in its nuclear, missiles, and defense programs.
News ID: 82858 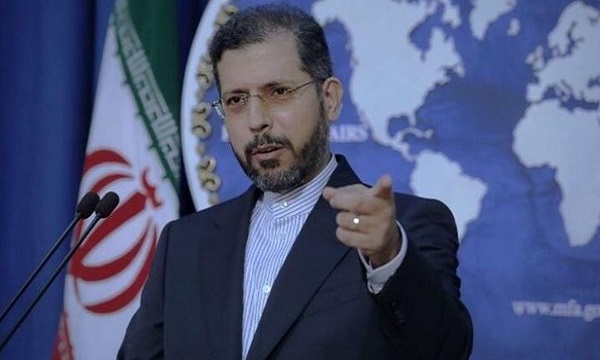 The spokesperson of the Iranian foreign ministry Saeed Khatibzadeh reacted to the statement issued at the meeting of the Persian Gulf Cooperation Council on Wednesday.

He further condemned the baseless accusations of the statement and noted that such moves are the result of resentment, political pressure from Saudi Arabia on the council, and lacking enough knowledge of regional developments.

Khatibzadeh added that the regional policy pursued by the Saudi Arabia and its destructive approach towards Iran and other countries have turned the region into a weapons depot for Western companies which has led to more foreign interference in the region.

He also expressed his regret over the normalization of relations of a number of Arab countries with the Zionist regime despite the regime’s crime in the occupied territories.

The spokesperson maintained that Saudi Arabia is the source of insecurity and terrorism in Yemen and is struggling to cover up its crimes to avoid international punishments.

“Countries that had previously made every effort to sabotage the JCPOA have now protested against Iran's legitimate actions under the Nuclear Deal, while the Islamic Republic has always followed the international law and its obligations. Therefore, Iran does not tolerate any interference in its nuclear and missile program and matters related to its military and defense policies,” he added.

Khatibzadeh strongly condemned the support of a number of regional countries for US economic terrorism against the Islamic Republic of Iran and expressed hope that members of the Persian Gulf Cooperation Council adopt a policy based on regional dialogue.

He also underlined that the islands of Abu Musa and Greater and Lesser Tunbs are the integral parts of the Iranian territory and the Islamic Republic condemns any claims regarding its territorial integrity.