TEHRAN (Defapress) - In his meeting with Iraqi FM, the Secretary of Iran's SNC called for severe punishment for the assassinators of the ex-IRGC Cmdr. Gen. Lt. Soleimani and his comrades.
News ID: 82979 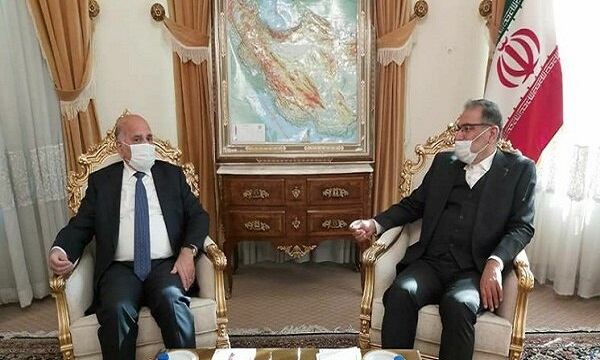 "The perpetrators of the terrorist crime of the assassination of Martyr Soleimani and his comrades must be prosecuted and severely punished," Shamkhani said, appreciating Iraqi officials' measure of asking Interpol to issue a "red notice" for the arrest of ex-President Trump and Pompeo.

Referring to the warm relations between the two countries in various fields, he stressed the need to accelerate the full implementation of joint agreements in various sectors.

Highlighting the entanglement of security, stability, and tranquility in Iraq and Iran, Shamkhani said: "Consolidating the authority and sovereignty of the Iraqi government in implementing law and order is necessary to overcome the political, economic and security problems in this country."

"The main cause of instability and crisis in the region is the evil presence of foreign forces, especially American forces," he underlined, underscoring the vitality of implementing Iraq's ratified law about ousting the US troops from the country.

Hussain, for his part, said developing cooperation in all sectors, especially accelerating the implementation of joint economic projects with Iran, is one of the main priorities of Iraq's foreign policy.

"The Iraqi people and government will never forget the vital rescuing support and assistance of the Iranian brothers in repelling ISIL in Iraq," he noted.

Hussein arrived in Tehran on Wednesday morning to hold meetings with Iranian officials.

Fuad Hussein's visit to Tehran will take place one day after the visit of Jeanine Antoinette Plasschaert, Special Representative of the Secretary-General for Iraq, to Tehran.

The last visit of the Iraqi foreign minister to Tehran was made in September.