No negotiations needed for US return to JCPOA

TEHRAN (Defapress) - The Spokesman for the Yemeni Armed Forces announced a rocket attack on the Saudi Aramco facility in Jeddah this morning.
News ID: 83091 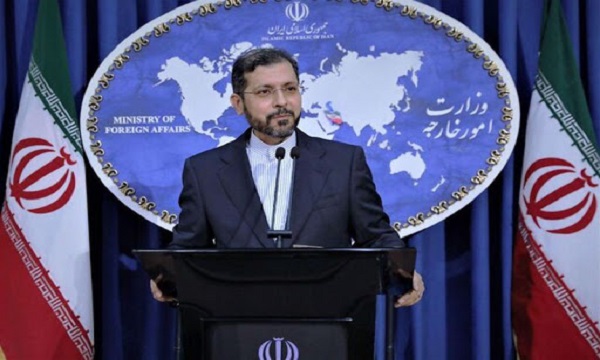 Saeed Khatibzadeh, Iran's Foreign Ministry Spokesman made the comments in a recent interview with Al Jazeera. In response to questions about how Tehran interacts with Washington in the nuclear talks, Khatibzadeh stressed that a diplomatic solution is the best possible option.

Emphasizing that the foreign policy apparatus of the Islamic Republic of Iran interacts with the parties present at the nuclear negotiating table in the most appropriate way possible, he said there is no need for negotiations to return the United States to the nuclear agreement.

Khatibzadeh went on to point out that there has been no (positive) change in Washington's attitude towards Iran, adding that first, the United States must return to the nuclear deal, then it can come to the negotiating table.

The spokesman added the United States of America is a country that violated the nuclear agreement by leaving it without the slightest coordination and dialogue.

Khatibzadeh also touched upon security developments these days in Iraq and the targeting of US military bases in western Anbar province and said that attacks in Iraq are suspicious. some possibilities and speculations indicate that the Zionist regime is playing a role in Iraq.

Elsewhere in the interview, he called on Saudi Arabia to end the blockade on the Yemeni people, saying that all countries, including Saudi Arabia, must work together to end the war. The root of the problem in Yemen is Saudi Arabia and its allies, he recounted.

He continued to call on the Saudi authorities to take a constructive regional dialogue without any suspicion and to really resolve the crisis in Yemen. If Saudi Arabia ends the sanctions, the war in Yemen will end, he said, adding that Iran welcomes any Saudi peace plan to resolve the Yemeni crisis.

Khatibzadeh explained the foreign relations of the Islamic Republic of Iran with its regional countries and partners and the level of cooperation, saying that there are special and appropriate relations between Iran and Oman, Qatar, Kuwait, as well as economic relations with the United Arab Emirates.