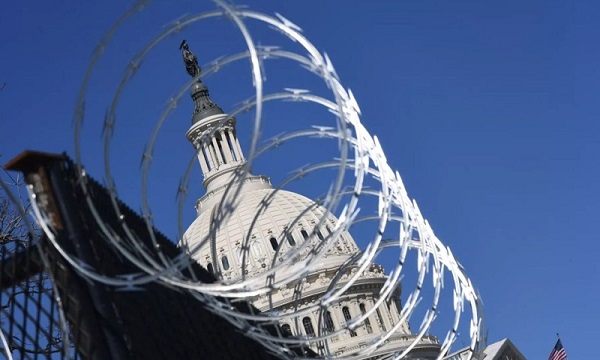 The US media have reported that the Capitol Police force is preparing for another assault on the Capitol building on Thursday after obtaining intelligence of a potential plot by a militia group, just two months after a mob of Trump loyalists and extremists attacked the building, leaving five dead and hundreds injured.

The New York Times reported that House leaders on Wednesday abruptly moved a vote on policing legislation from Thursday to Wednesday night, so lawmakers could leave town.

The “possible” plot, as described by the Capitol Police, appeared to be inspired by the pro-Trump conspiracy theory known as QAnon. Intelligence analysts had spent weeks tracking online chatter by some QAnon adherents who have latched on to March 4 — the original inauguration date set in the Constitution — as the day Donald J. Trump would be restored to the presidency and renew his crusade against America’s enemies.

According to Wall Street Journal, House leaders canceled Thursday’s legislative session and rescheduled morning votes after police officials warned of a possible plot by a militia group to again storm the Capitol.

The office of House Majority Leader Steny Hoyer said late Wednesday that all votes set for later this week would be wrapped up by the evening. Capitol Police said they have obtained intelligence that “shows a possible plot to breach the Capitol by an identified militia group” on Thursday.

House Democratic leaders who discussed the warning decided that the threat of violence was too significant to ignore, and lawmakers were concerned about being in the building, according to Democratic aides. They moved Thursday morning’s votes to Wednesday evening.

The Senate planned to convene at noon, according to the chamber’s floor schedule. Democrats are working to complete changes to President Biden’s $1.9 trillion Covid-19 aid bill.

Capitol security officials are preparing for potential threats on Thursday and adding personnel to protect lawmakers, according to a separate memo sent to members of Congress and viewed by the Wall Street Journal.