TEHRAN (Defapress) - The Minister of Defense of Tajikistan met with the Chief of Staff of the Iranian Armed Forces, Major General Mohammad Bagheri in Tehran on Thursday morning.
News ID: 83200 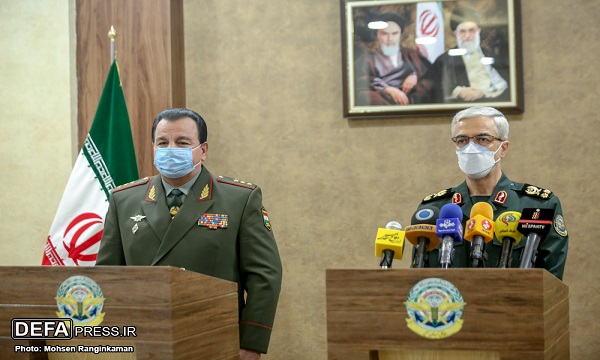 Tajik Defense Minister Colonel General Sherali Mirzo held a meeting at the complex of General Staff of the Armed Forces of the Islamic Republic of Iran with the Chief of Staff of the Iranian Armed Forces, Major General Mohammad Hossein Bagheri.

The development of military-defense relations in various fields of research, training and security is one of the main topics discussed in the meeting.

The Chief of the staff of the Iranian Armed forces said about the agreements reached during the meeting with the Tajik delegation that in the meeting “it was decided to establish a joint working group between the two countries’ armed forces and this working group will be tasked with drawing and planning the future of military and defense relations between the two countries."

Major General Bagheri added that “the cooperation between the two armed forces of Iran and Tajikistan will have a positive impact on enhancing security and stability in the region and the development of the Tajik Armed Forces as well as the use of the two nations’ experiences.”

He further said that the visit of the Tajik military delegation to Iran “is the beginning of the development of military and defense relations between the two countries.”

Referring to the shared cultural similarities between the two nations, Maj. Gen. Bagheri said that Tajikistan is a Persian-spoken country like Iran with the same history and religion, expressing hope that the visit of the Tajik military delegation will lay the ground for development of the two nations’ military development.