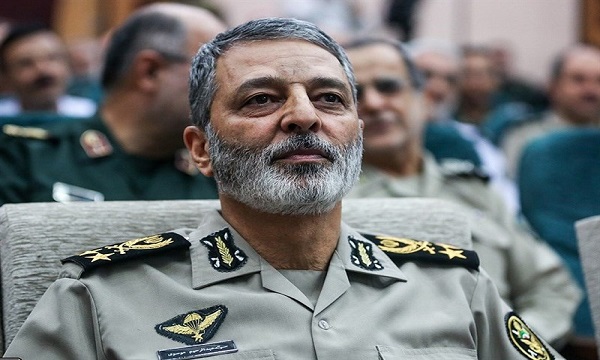 The commander made the remarks in a letter to Military attachés of other countries on the occasion of Iran’s National Army Day.

“In a period that we witness cooperation of America with terrorist groups, withdrawal of foreigners from the region and continuation and boosting of cooperation among committed countries, especially in West Asia, are essential and will guarantee regional and global peace and security,” reads the message.

The Army of the Islamic Republic of Iran is ready to cooperate with armies of all committed countries for ensuring the security of West Asia and establish peace across the world, he said.

Enjoying experiences of eight years of the imposed war, the Army has reached a significant point in its defensive power and is able to safeguard the security of any region through cooperation with armies of other countries, he said, adding, realities of regional and global developments point to the necessity of increased relations between committed countries for countering US and Israeli regimes’ hostile actions.

America and the Israeli regime are the main culprits of tensions in West Asia, he said, adding, “The Islamic Republic of Iran has no choice but to take steps in the path of enhancing its defensive might.”

America’s opposition to Iran’s defensive programs comes as it is exporting huge amounts of arms to the region and making threats against Iran, noted Mousavi.