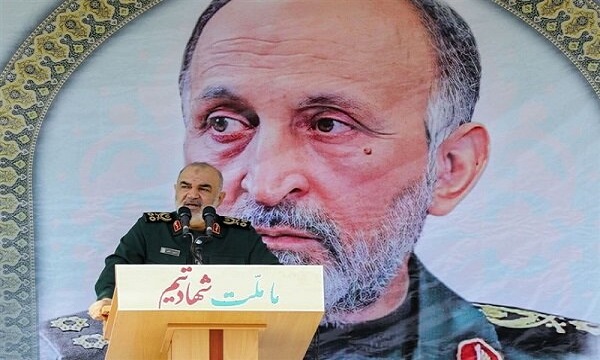 Major General Hossein Salami, the Commander-in-Chief of the Islamic Revolutionary Guard Corps (IRGC) made the comments during a ceremony to introduce the new IRGC Quds Force's deputy for coordination affairs attended by IRGC Quds Force Commander General Gha'ani and some other IRGC senior commanders in Tehran on Wednesday.

The IRGC chief-in-command hailed the role that the IRGC Quds force played in foiling the Arrogant Powers' (major western powers) plots to divide the Islamic countries.

General Salami also pointed to the great role that former IRGC Quds Force Commander Martyr Ghaseem Soleimani played in bringing the Islamic nations together while securing the Iranian national interests, saying that the Quds Force along with Iraqi and Syrian local forces did not allow that the formation of a state favored by the Global Arrogance in those countries.

He further explained that the Quds Force could successfully defend Iran and Islam's interests by relying on the young generation to form the Resistance Front.

The IRGC chief-in-command went on to say that Martyr Soleimani chased the enemies in deserts, mountains and plains to bring security to Iran and other Islamic nations, adding that had it not been for Soleimani presence in the battlefield, ISIL would have become a pandemic like coronavirus pandemic today.

"Had it not been for this huge force with so much support on the ground, ISIL would be a dangerous political virus today, a political coronavirus and a security coronavirus," he said. "If Haj Qasim had not stood, ISIL would have infiltrated in this land and other lands and other social structures today."

General Salami also said that the efforts made by Martyrs Soleimani and IRGC Quds Force's former second-in-command General Hejazi, who passed away on April 18 brought power and security to the nation today.

After the demise of General Seyyed Mohammad Hejazi, who passed away on April 18 after a long battle with the effects of chemical weapons he suffered during the Iraqi imposed war on Iran between 1980-1980, Brigadier General Mohammad Reza Fallahzadeh replaced him as the Second-in-Command of the IRGC's Quds Force. Fallahzadeh served as the IRGC Quds Force's deputy for coordination affairs before assuming his new position on April 19 by the Leader Ayatollah Ali Khamenei who is the commander-in-chief of all the Iranian armed forces.