TEHRAN (Defapress) - Chief of Staff of Iran's Armed Forces, General Mohammad Hossein Bagheri has issued a message on the anniversary of international Quds Day, saying that the Iranian armed forces will not abandon even for a moment the Quds cause.
News ID: 83306 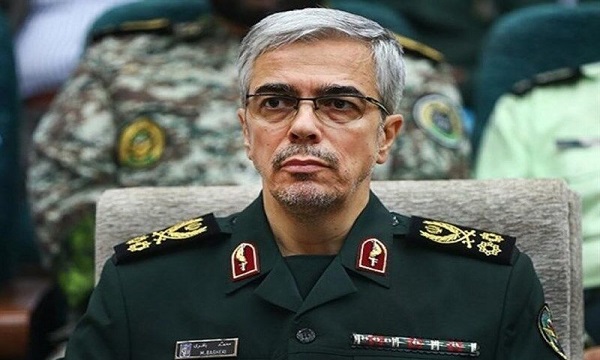 Major General Mohammad Bagheri, the Chief of General Staff of Iran's Armed Forces issued the statement two days before the arrival of the international Quds Day, the last Friday of the fasting month of Ramadan.

The top military official recalled that the Quds Day was firstly introduced by the late architect of the 1979 Islamic Revolution Imam Khomeini and described the international day as the most important and influential events in the process of resistance and struggle of Muslim and oppressed people of Palestine against oppression, crimes and occupation of the Israeli regime.

He further described late Imam Khomeini as a mobilizing and unifying force in the Islamic world who was able to create the necessary grounds for the formation of the global anti-Zionist movement, the Islamic Awakening and Resistance Front on the regional and international stages.

The Chief of Staff of Iran's Armed Forces also noted that the 73-year-old resistance of the oppressed and ardent Palestinian people has now reached its apex of success and the time for the world to witness the most important and glorious referendum in history to determine the fate of Palestine and the return of the Palestinian refugees to their ancestral land is very close.

The top Iranian commander further pointed out that the Palestine issue has shown the true face of the Western countries' claims on human rights, as they have remained indifferent to the Israeli crimes against Palestine.

General Bagheri also pointed to the recent incidents in Israel, saying that the Zionist regime of Israel recently experienced the bitter taste of the deadly and fatal blows from the Resistance Front and the powerful Palestinian Intifada.

"The Intifada, which has moved forwards from 'stone' to 'missile' and is on the verge of 'deterrence', and is more ready than ever to dismantle the occupiers with the help of the resistance and the Islamic Ummah," he said.

General Bagheri went on to conclude that the Armed Forces of the Islamic Republic of Iran are spearheading the fight against the enemies of Islam and the Qur'an, under the command of the Leader Ayatollah Khamenei, who commands all Iranian forces, and they will not abandon the Quds cause even for a moment.