TEHRAN (Defapress) - Iran’s Army Chief Commander Major General Abdolrahim Mousavi said that continuation of brutalities and crimes of the Zionist regime is the result of betrayal of compromisers of ‘Deal of the Century’.
News ID: 83346 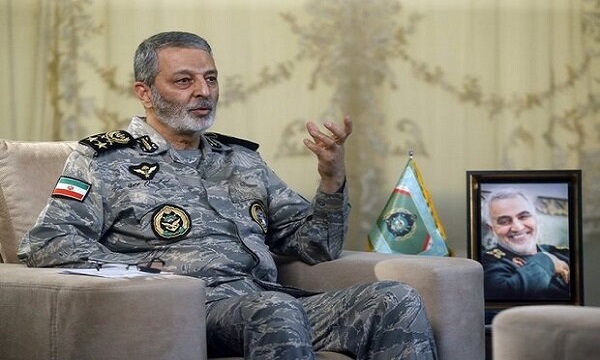 Speaking among senior commanders in a local ceremony on Sunday, Major General Abdolrahim Mousavi said that traitors of the region should know that blood of children of Gaza in Palestine will drown compromisers of ‘Deal of the Century’.

Islamic Republic of Iran considers continuation of crimes and atrocities of the Zionist regime against the oppressed Palestinian people as the result of procrastination and betrayal of compromisers of the Deal of the Century, Army commander emphasized.

Zionist regime, which was once dreaming of dominating the region, are now desperate and stuck in battle with the Resistance Front’s forces, he said, adding that the Zionist regime’s dream of the Nile to the Euphrates has been mitigated to the nightmare of maintaining Israeli terrorist garrison.