TEHRAN (Defapress) - Chief of Staff of Iran's Armed Forces Major General Mohammad Bagheri has congratulated the victory of the Palestinian nation against the Israeli regime in the recent 12-day battle.
News ID: 83371 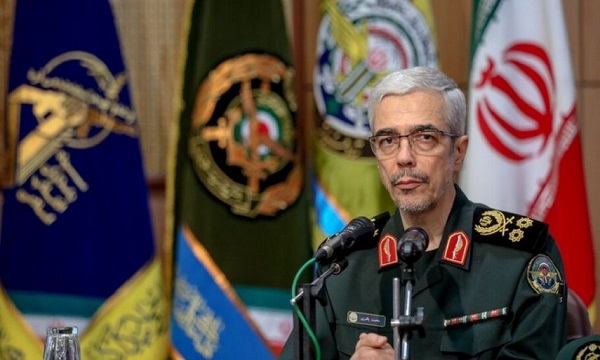 Chief of Staff of Iran's Armed Forces said that the 12-day recent battle which was codenamed "Sword of Quds " operation by the resistance, recalled the victories achieved in the previous battles by different resistance groups in Palestine and Lebanon, adding that the recent victories promise a future Palestine "From the Sea to the River."

He said that he was utterly sure that the clock is ticking for the end of the oppressive and criminal regime of Israel.

General Bagheri also pointed to the failures of the Israeli regime's Iron Dome against rockets fired by the Palestinian resistance, saying that the resistance rockets shattered the image of the Israeli air defense.

He also warned Arab states that have normalized ties with the regime, telling them to abandon betraying Palestinians and end their partnership with the Zionist regime.

At the end of his message, the Chief of Staff of Iranian Armed Forces congratulated the Palestinian nation on the recent victory, asking God Almighty to endow the final victory and liberation of holy Quds to the Palestinians and all the followers of the Quds and Intifada.