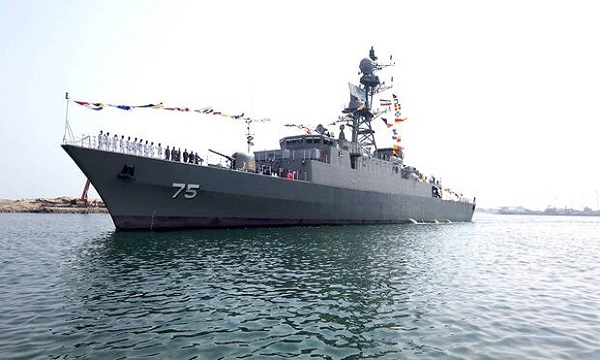 In a ceremony held on Monday through video conference, Iranian home-grown destroyer “Dena”, as well as the “Shahin” minehunter, joined the Iranian naval fleet at the order of Iranian President Hassan Rouhani, in southern Port of Bandar Abbas.

Designed and built by Iranian experts at Iran’s Ministry of Defense and Armed Forces Logistics, Dena destroyer is a Mowj-class vessel equipped with advanced systems.

Equipped with a variety of domestic equipment and defense systems, the Dena destroyer weighs more than 1300 tons and is able to sail long distances in the seas and oceans.

Dena destroyer has the ability to search, detect, monitor, confront and, if necessary, destroy any aerial, land, and subsurface threats.

Having a flight deck, from which helicopters take off and land, is one of the important capabilities of the Dena destroyer.

Detecting and neutralizing various types of sea mines is one of the capabilities of Shahin minehunter which is manufactured by Iranian young experts.