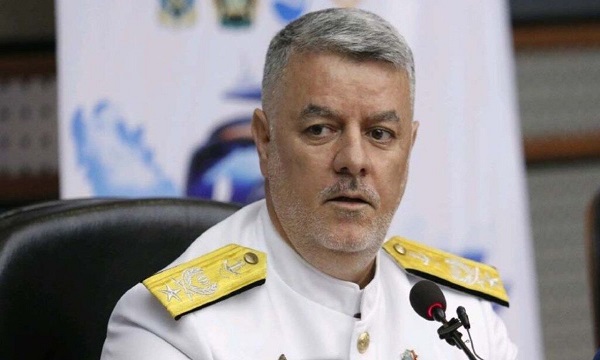 Iran's Army Navy Commander Rear Admiral Hossein Khanzadi who was holding the presidency of the 6th meeting of the Indian Ocean Naval Symposium, commonly known as IONS, made the comments at the 7th IONS meeting which is being held on Reunion island located in the midst of the Indian Ocean, 700 kilometers east of the island of Madagascar.

At the start of his speech at the 7th IONS meeting, Admiral Khanzadi said that "I am confident that by exchanging views and presenting constructive views and through the synergy of existing capabilities, we can take effective steps towards achieving the goals of the conference."

The Iranian army navy commander later said that "Maritime security is the result of the attention of all coastal states to the surrounding seas, good governance over the administered seas, environmental knowledge of the sea, and synergistic regional and global interactions to prevent the formation of insecurity hotbeds in the international waters."

"It is maritime security that makes sure the nations gain their wealth and enjoy their maritime interests, and it is the navies that provide the security to high seas and international waters to lay the ground for maritime activities, especially in the age of the water economy," According to Admiral Khanzadi.

Elsewhere, the Iranian army navy commander gave a summary of the history of the IONS since 2008, when it was built, especially the IONS activities since its 6th summit. He pointed to the two rounds of joint naval exercises between Iran, Russia and India as one of the most important achievements of the 6th round of the summit.

He described the passiveness of some IONS members along with their targeted actions as a threat to the body, stressing that, "Although the entire summit and its contributions are a voluntary issue, one of the issues we faced during this period was the passive action of some members. We are now witnessing the formation of coalitions with the participation of a number of members of this summit in the North Indian Ocean, the Sea of Oman and the Persian Gulf, whose activities not only do not strengthen regional convergences but also they overshow the synergistic efforts of the IONS which are the most important ground for obtaining integration to achieve collective security seriously and undermine it."

He continued, "We must accept that the dichotomic presence of others makes the IONS Summit dull and a ceremonial event; Meanwhile, regional rivalries are overshadowing maritime security convergences and doubly affecting the functions of the summit."

Admiral Khanzadi went on to stress that the Iranian Army Navy as the head of the IONS Maritime Security Working Group, will make every effort to pave the way for regional integration.

He pointed out that the Iranian navy will open a coordination center for international cooperation on maritime security with various aims.

He added that opening the center will improve maritime security in the Indian Ocean region. He also invited IONS members to attend the opening ceremony of that cooadinating center.

The commander of the Iranian army navy called for intensifying efforts to establish a permanent secretariat of the summit and to follow the proposals more seriously.