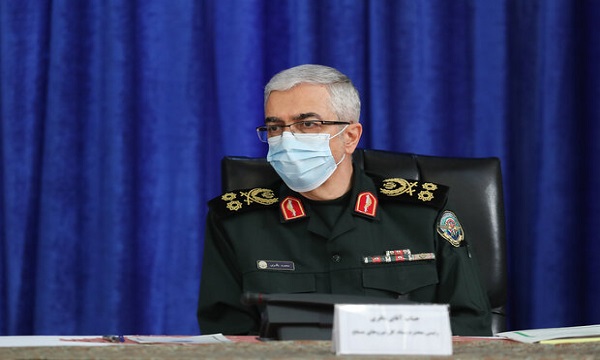 Bagheri made the remarks in his meeting with commanders and senior officials of the Islamic Revolutionary Guard Corps (IRGC).

In this meeting, which was held Tuesday morning at the IRGC Ground Forces Command Headquarters, the commander of IRGC Ground Force Brigadier General Mohammad Pakpour as well as the commanders of the IRGC's affiliated bases, in separate reports, explained the state of defense and military preparations in their mission area.

Assessing and reviewing security movements and events, exchanging views on various security, defense and military issues in providing lasting security and strengthening intelligence aristocracy on movements in areas around the country were other issues discussed in this meeting.

Appreciating the tireless efforts of the IRGC ground forces in providing lasting security in the border areas, especially in the northwest and southeast of the country, General Bagheri said, "Despite the conspiracies and plots of the enemies in the development of threats in the border areas of the country, which are sought to compensate for their chain failures in the region, and the border security situation enjoys positive and reassuring growth."